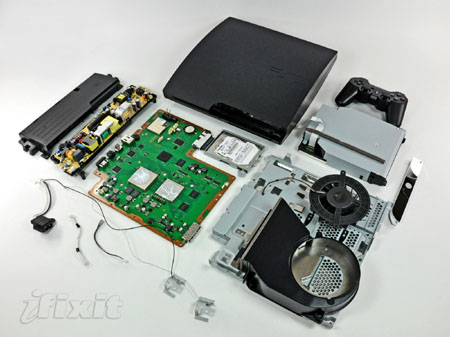 As the world gets ready for that sleek new supermodel that is the PS3 slim, the people at gadget repair website ifixit.com have taken the latest iteration of the games console apart, purely for science that is?

As we reported in Absolute Gadget, the new PlayStation 3 Slim is 30 per cent lighter, 32 per cent smaller and uses 34 per cent less power. But how does that look when you unscrew the thing.According to the iFixit techies, heat dissipation was the main thrust of development. They said that Sony used a large piece of plastic ducting to draw air from the console’s fan to the the heatsink, bringing about the extra cooling. It also has a 95mm diameter fan with 17 blades.

The fan takes up a lot of space within the console as does the heatsink and Blu-ray drive, the iFixit guys said. But surprisingly, a lot is left unchanged. Many chips are still the same from the previous model. The Slim now boasts a 120GB, 5400rpm Toshiba Sata hard disc but now has Sony’s own AV multi-out controller.

The Ethernet controller is manufactured by Marvell and Panasonic is making the console’s HDMI controller.

Many of us won’t invalidate the guarantee on our PS3s so it is good to see iFixit doing the dirty work for us. More to see here.

Or watch the video below