We really haven’t a clue if you want order in your life or at least a tidy beard. Either way, you might want to have a butcher’s at this iPhone app. Noel Edmonds wants to bring order to you fractious lives.

Rather than putting you faith in some supernatural being (that is so last millenia) Edmonds, he of Mr. Blobby fame, wants you to go out and get want you want from life by Cosmic Ordering.

This new-age thing is a bit like Pizza Hut with out the free two-liter bottle of Pepsi-Cola (you know you really wanted Coca-Cola). The iPhone app is said to help people who part with hard-earned cash by using the power of the entirety of existence to bring about change in one’s own life, just by owning the Apple smartphone – cute ehh?

Rather than writing down want you want from life on scraps of paper like what just about every self-help book recommends, you can do the same thing on the iPhone. But surely there is a “to-do” list already on the iPhone? We hear you ask? Probably, but by buying Edmonds souped-up to-do list you will be helping the tidybeard himself get a little closer to his own personal goal. And who are you to prevent the cosmos moving to the tune of the former Radio One DJ – huh? 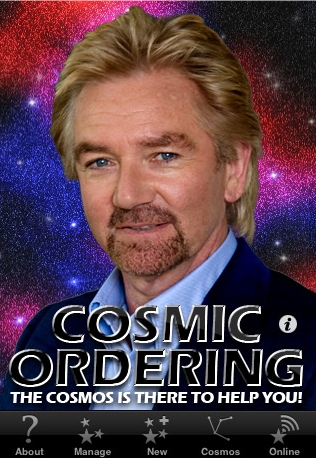