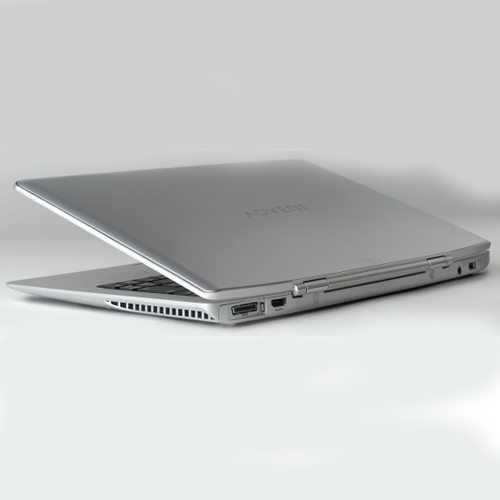 Netbooks are great things – that’s why so many of them fly off the shelves. However the Advent Altro aims a little higher than that with its tribute the the MacBook Air.

This ultraportable device is only slightly heavier than the Air (the Altro weighs 1.7kg) but costs only half the price and around £600 (from PC World). The reason for this is rather than use aluminium in the design of the case it uses plastic instead. It is also thinner as the MacBookAir.

That said it is still rugged enough for everyday use, but it can seem a little too flexible when typing. The screen can also bend quite easily and that disturbs us slightly. The hinges are OK but seem a little weak.

The keyboard looks a lot like the modern Apple MacBook keyboards we have used, but typing on them doesn’t seem to be as much of a pleasure. We mistyped when using this keypad quite a few times and sometimes missed out letters.

The touchpad also mimics Apple’s design with gesture-control functionality, although we were unable to test this. One thing that is does have on the Air is a fingerprint reader, which should add some security to the device, as does the anti-theft software included on the laptop.

The 13.3-inch display is distinctly average. Not to say it is bad. The 1366 by 768 screen is quite bright but could have been a tad brighter. But images are nice and sharp and the contrast and colour are suitable for use. It can be a bit glossy so this may not be the best laptop to use outdoors on a sunny day.

What sets this laptop apart from netbooks (and consequently stops s from refering to it as a netbook) is its use of a CULV (Consumer Ultra Low Voltage) 1.2GHz Intel Celeron 723 chip rather than an Atom. It runs at just 10W and is low voltage, so the device never runs hot or burns you lap if using it for long periods. It also sports a 120GB hard drive and 3GB of memory (which is more than what you get with an Air.

As you would expect from this device, multi-tasking is a big ask and some would say a bit too much of an ask. General inter use and word processing are ok for it to handle.

The battery power manages to keep working for around three hours, this is only just enough if you plan to use it to go back and forth from work.

Connectivity-wise, it sports just one USB port, one HDMI port and an audio port. We are sure that an extra USB port could have bee wedged in somewhere and we are not sure if an HDMI port is much use as the set-up doesn’t seem to suggest enough poke to run high-definition content (we could be wrong on this, but it only has a Celeron chip – not the fastest processor on the planet). The unfortunate issue of lack of ports is overcome slight with the inclusion of a compact hub which plugs in where the power supply normally goes. The power supply then piggybacks off this hub and you get a VGA-out, two USB ports and an Ethernet port.

Wireless connectivity is better. It sports 802.11n wireless and also comes with space to add a SIM card (beneath the battery) so you can add mobile broadband.

While it could never compete with the MacBook Air, it is cheap enough and usable enough for anyone wanting the mobility of a netbook with slightly more power. Hopefully, later iterations of the this will rectify its small problems.