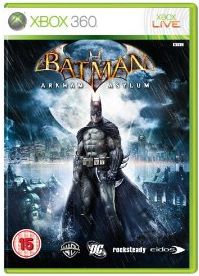 Batman games aren’t known for their brilliance (although AG admits we did play that Amiga game of Tim Burton’s film to death). But what’s this? Arkham Asylum is actually a break from the norm? Better get our two top games reviewers on the case in true Batman detecting style…

It must be tough to be Batman. Quite apart from battling insane supervillains, keeping up a playboy lifestyle and maintaining your Ridiculous Growly Voice™, you’ve got to acknowledge the fact that you’re competing with Superman for the Superhero With The Worst Tie-In Videogames award. On the good side, you’ve got Lego Batman and, arguably, Batman Returns on the SNES. On the bad side, you’ve got, erm, just about every other Batman game ever made. But Bruce need fret no more, for here comes Arkham Asylum to prove the joys of hanging out in shadowy corners whilst dressed like a rodent.

The game could well have been called The Amazing Adventures of Magpie Man, as it snatches up the shiniest bits of Batman mythology and ideas from other games to take back to its nest. On the Bat-side of things, the basic concept and general atmosphere comes from graphic novel Arkham Asylum: A Serious House on Serious Earth; it’s written by one of the producers of the ‘90s cartoon, who brought three of its voice actors along with him (namely the voices of Batman, Joker and Harley Quinn); and it has a grim-‘n-serious tone that would feel right at home in Christopher Nolan’s films. As for games, the opening sequence bears a considerable debt to the first Half-Life, the general gothic style of Arkham Island and the way you find audio recordings of psychiatric sessions with the villains is pure Bioshock, and the trippy nightmare sequences as Batman succumbs to the Scarecrow’s fear gas are straight out of Gamecube cult classic Eternal Darkness. This patchwork approach could’ve made the game an incoherent mess, but developer Rocksteady has stitched the threads together superbly.

The best superhero game of recent years is Spider-Man 2, which worked because it used intelligent, intuitive controls to make you feel like the webslinger. Rocksteady obviously paid attention, as in Arkham Asylum you really do feel like The Bat himself at all times. Despite context-heavy controls (there isn’t even a jump button), within an hour you’ll be swooping around the darkest reaches of the asylum with utter confidence. And we’ll be surprised if there’s a better gaming moment this year than when you first pull off an Inverted Takedown (hang upside down from gargoyle, wait for goon to pass underneath, drop down and snatch up goon, knock goon out and hang him feet-first from gargoyle, cackle as other goons panic when they find him).

The combat also benefits from a stripped-down approach. Essentially you’re just hitting one button, occasionally a second, and very rarely a third or fourth, but Batman pulls off all sorts of intricate moves onscreen. It should probably make you feel disconnected from the action, but instead it’s remarkably absorbing and very satisfying. And it’s just as well, because half the bosses in the game are just lengthy scraps with minor thugs (the other half are just irritating – the boss fights being the game’s one major weak point). 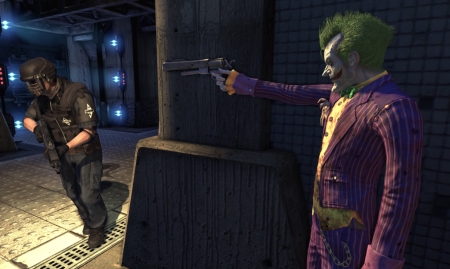 But Batman isn’t just a fighter, he’s the World’s Greatest Detective – and happily, this actually ties into the gameplay. With your “Detective Vision” (basically an X-ray) you’re required to check out crime scenes for fingerprints and the like. It’s actually a very basic concept that doesn’t require much work on your behalf, but it’s nice to see that Rocksteady bothered with this often-forgotten side of Mr Wayne’s arsenal. And if you do feel like a bit of extra detective work, there are loads of goodies and Easter eggs hidden about by the Riddler – again, quite basic stuff, but the sheer amount of things to find makes it interesting.

Rocksteady has pulled off quite a trick with Arkham Asylum. Cobbling bits and pieces together, providing deceptively simplistic gameplay, it probably shouldn’t be great. But its sheer confidence and intelligent execution means that suddenly Batman is a force to be reckoned with in videogames. And the post-credits teaser hints at a sequel. We can’t wait.

One of the most eagerly awaited game titles of 2009 is finally here and at no point does it disappoint. Batman: Arkham Asylum weaves a complex and intelligent narrative; at last, there is a comic-book game that gives the player something to do. That’s thanks to Gotham’s criminals being all under one roof (or several, when you discover the sheer size and scale of the Asylum).

As the Dark Knight, you find yourself locked in Arkham Asylum with The Batman’s most feared and renowned rivals. From The Scarecrow to Harley Quinn, they’re pretty much all here. But how could they not be? Arkham is Gotham City’s home for the criminally insane, after all. To escape, Batman must find the Joker – but to do this, he must journey through Arkham. At first it appears that you’re just going to be fighting off hordes of villains, but the game goes far beyond the traditional comic-book beat-’em-up type of story. For this, game designers Rocksteady must be commended. So often we find ourselves looking for a reason to carry on playing these kinds of games and if the truth be told, it can get a little bit tedious. Remember the Spiderman game? You know, the one where you just had to swing around the city picking off criminals and completing set challenges. Beyond this, there wasn’t that much to do.

Amongst a strong and exciting narrative, Mark Hamill reprises his voice role as The Joker (a role he played for the cartoon series), and he is on fine form as Batman’s arch nemesis. He must be relieved to have finally shaken off the tag of being known as that bloke who played Luke Skywalker. Hamill gives The Joker everything that the character needs to have; he’s dark, he’s scary, he’s creepy and most important of all, even when he’s not supposed to be funny, he actually is very funny.

Batman: Arkham Asylum is a brilliantly enjoyable game that will give players lots of enjoyment – and is definitely worth a purchase. 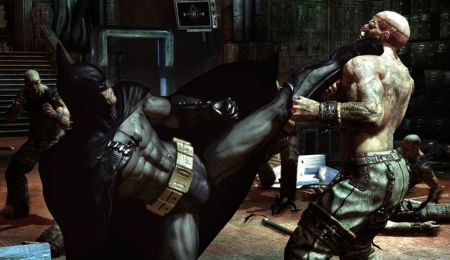 Uncharted 2 wins pretty much everything at Interactive Achievement Awards