Absolute Gadget
Home News Games Get your art in Crackdown 2 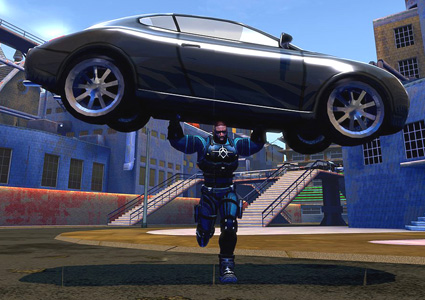 Remember the ace GTA-with-superheroes-’em-’up Xbox game Crackdown from a couple of years ago? Y’know, you were a genetically enhanced policeman in a city of The Future and you could teach nasty criminals a lesson by chucking a car at their heads? That’s the one. Fancy getting your scribbles in the sequel?

Crackdown 2 is currently being made in deepest Dundee with an aim to be released sometime next year. It’s set 10 years after the first game, and the play area – Pacific City – has turned into a derelict dystopian warzone. And what do you find in derelict dystopian warzones? Graffiti! Developer Ruffian Games, in its own words, “haven’t quite got round to drawing it yet”, and as such would like you to do the artists’ jobs for them.

Full details are on Ruffian’s site, but basically they want non-obscene, non-nicked-off-someone-else pictures, preferably in a 1,024 x 1,024 PNG image. All pics must be in by 9 December.

The team’s favourite submissions will then be included in the game, and the lucky artists will get their names in the credits.

Get an Absolute Gadget logo in there and we’ll buy you a pint!

The Cloud to extend free Wi-Fi in City of London

Boris talks up Wi-Fi London in time for Olympics