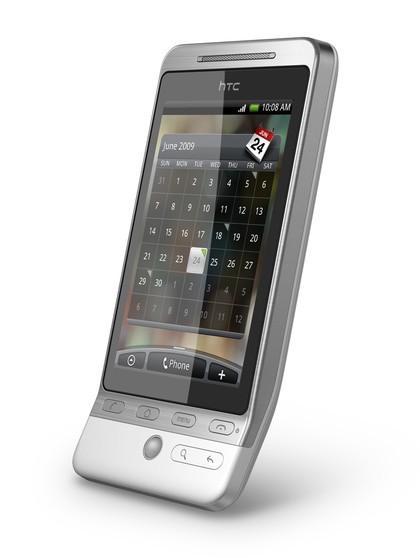 With the iPhone dominating the smartphone space, how would other mobiles fight back. HTC are hoping you are holding out for their new Hero.

The new phone sports an updated version of the Android mobile operating system, developed by Google. Of course, the phone isn’t actually a Google phone, as it is not branded or co-developed by Google. But it does featureHTC’s Sense UI, which should make it feel a bit better to use.

In the UK the phone is known as the G2 Touch when sold through T-Mobile and the look of the device is one of those love-it-or-loathe-it affairs. The bottom has a jutting chin reminiscent of BruceForsyth. However, in the hand it is very comfortable to use and doesn’t slip out of the hand.

While the iPhone achieves most functions relying on the touch screen and one button, the Hero has several buttons at the bottom (and a couple at the side for good measure). The call terminate button is also the power button and can put the phone to sleep as well. Having all these functions in one key can mean that you sometimes power off the phone when all you wanted to do was get out of an application. You have to get used to using the “home” button instead to do that.

The menu and search buttons are context sensitive so work in different ways depending on the app running.

The phone doesn’t sport a front camera which means that video calling is a no-no (not that this will bother anybody). This lack of features, other than buttons and screen, serve to promote the minimalist design of the phone.

Out of the box (which doesn’t come with much) you get the standard charger, USB cable and some headphones. The headphones aren’t great quality but do control your music player with forward and backwards controls.

The display is, quite simply, its major strength. HTC has a great pedigree in taking mobile OS and making them work properly for users (it’s had a lot of practice with Windows Mobile). The SenseUI marks this out a a true pretender to the iPhone crown.

There are seven home screens to flick between and these can show apps or widgets (or a combination of both). The default option is well thought out with a big clock including weather updates and your email and messages on the front screen. Of course you can change this all you like but many will find this great to use.

Taking many a cue from HTC’s TouchFLO 3D interface used to make Windows Phones not suck so badly and based Sense on it. The trackball can whizz between screen as well as using your fingers.

Customisability is the name of the game and if you can’t get enough of seven screens you can always use the scenes function that can change the screens themed on work,play and travel, etc., giving you up to fifty or so screens for you to play around with.

The display is HVGA, so not as high a resolution as other phones in HTC’s range but good enough for most uses.

While working, the phone does experience some lag as you navigate around it. Under the hood is a 528MHz processor, which seems to struggle with multi-tasking. A firmware update should fix this problem, if you are brave enough to carry this out.

Changing the screen between landscape and portrait should be easy enough, but we felt at times like you had to slap the side of it “Quantum Leap”-style in order to change orientation.

That said, the UI is clever enough to make a link between your friends on a contact list and those on your Facebook page. It also works well with the Google address book, so if you have set this up on your phone and maintain phone numbers in Google, then out of the box the experience of putting numbers into your phone becomes really easy.

Call quality is faultless, making and receiving calls, even on some of the lesser networks performed admirably. The lip at the bottom edges the microphone closer to your mouth and makes calls clearer.

Messaging encompasses not just text but also, IM, email and twitter updates. Texting is split up into conversations, Gmail-style, and this makes keeping track of who you are texting simple.

The screen keyboard, like its iPhone rival, takes some getting used to, but once mastered, you will wonder why you needed a physical keyboard before. It usesXT 9 correction for clumsy thumbs and you just have to let it guess what you were trying to type and it gets this process mostly right.

Email is easy to set up for you use Gmail and maybe not so easy if you use other email providers or Microsoft Exchange. It is not impossible, but will take time to hook up to an exchange server.

Using internet on the device is a real pleasure and it can handle those websites more suited for the desktop with ease. The smart fit text function canresize text to maintain readability and this, we found, works really well. As with the iPhone, you can pinch the screen to zoom in and out at will.

One thing that the Hero does which the iPhone and so many wannabes don’t is Flash video, It can actually play the things. Well, kind of, if you find a YouTubevidoe the app starts up and plays that.

The camera is rather average, coming in with a 5-megapixel effort you’d expect more, and it doesn’t quite deliver. There is no flash so you get grainy pictures and blurring in low-light conditions. It is slightly better in the day. So no shots in the pub then.

Music and video are ok. The design is not so great for playback and the sort. It is controls via the screen and some buttons are located on the lock screen. TheCoverflow -a-like lags when perusing your playlists and the headphones are only average in use. This lets it down compared to the beautiful way that music on the iPhone works.

Video is average as well and some formats won’t play out of the box (i.e. AVI and you have to pay for an app on Android Market to fix that problem).

The phone relies on Apps to make it a contender with the iPhone and in this case it doesn’t disappoint. While not in the same league as iTunes, the Android market place has a sizable amount of software and that is growing daily.

The Hero’s pre-installled apps are very good. The calculator runs well. There is a calendar app that syncs with you Gmail calendar and QuickOffice is good for dealing with documents.

The Twitter app is superb and could annoy as we have some many followers on the site that it kept going off every minute (we had to disable this in the end).

Overall, the Hero is very impressive and on first looks could have been a proper contender to the iPhone’s crown. But there are too many little faults that need to be addressed, but hopefully with the arrival in the near future of Android 1.6 (Donut) hopefully a lot will change and for the better.

Hopefully, this heralds a time for Android phones to come to the fore and make Apple (and other smartphone vendors) raise its game as well.