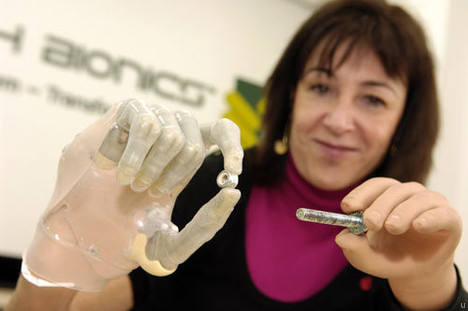 If you lose a hand in an accident, there are several replacements to go for, from “hook” all the way up to “bionic”. But what if you only lose two fingers? Nothing much you can do there, right? Well, as you may have guessed from the headline, not any more.

The world’s first bionic fingers have been developed by Scottish firm Touch Bionics. Called the ProDigits, they’re directly controlled by the brain and don’t need any surgery to attach. Each set is custom-made, fitting onto however much of the hand is there and using sensors attached to the skin to register brain signals. Users can even choose from a range of different materials to cover the fingers.

The partial hand amputee population is reckoned to be about 52,000 in the EU and 1.2 million worldwide. Touch Bionics’ marketing director, Phil Newman, said, “There has been no solution like this for the partial hand amputee community. The ProDigits provide a powered device with a grip and it has returned these people to a level of functionality and independence.

“It is supporting a community that has never had support before.”

An early adopter of the new technology is Spanish concert pianist Maria Antonia Iglesias, who suffered from an illness that required finger amputation. She said the hand worked like a “dream”.

“Even a simple thing like holding and lifting a glass of water to drink from was impossible before, but with ProDigits I can do it easily,” she added.

The ProDigits come in at £35,000-£45,000, which includes the fitting, skin covering and occupational therapy. Touch Bionics is hoping to work with the NHS in the future.