Getting the bug for Rock Band or Guitar Hero is all well and good, but a lot of gamers would love a digital guitar that bridges the gap between playing games and real music performance and composition. And while one such instrument is on the way, sadly you won’t be unwrapping it this Christmas.

“Ultimately we apologise for not being able to be under the tree for Timmy this year for the holidays. It pains no one more than us!!!” said Kevin Kent, CEO of Inspired Instruments.

“We made some major improvements for the long term viability and flexibility of the You Rock Guitar and it cost in time and money, but we believe it was well spent. And as tough as the decisions were, we made them in the best interest of the gamers.”

The You Rock guitar is, according to Kent, “the first Rock Band and Guitar Hero controller that actually feels and plays like a real guitar.”

In addition to offering frets and strings instead of buttons and paddles, Kent claims the You Rock Guitar digital guitar:
* Never needs tuning
* Features real-feel play with 100 guitar sounds
* Offers USB connectivity for digital recording via computer
* Provides MIDI functionality to emulate the sound of virtually any instrument for creating music via popular programs like Garage Band, Finale, Acid on the PC or Mac
* Is portable and can be played anywhere
* Can be played via amplifiers, headphones, iPods and iPhones
* Eliminates the wrong notes for beginners thanks to its “You Rock Mode”.

The You Rock Guitar will have an RRP of $179.95 (around £110) at its February 2010 launch. The instrument’s GameFlex cartridge system enables one You Rock Guitar to be used for multiple video game consoles (Nintendo Wii, PlayStation and XBOX), with cartridges selling for around $20.

The company will be showing it off at the 2010 CES show, at Booth 5627 of the Gaming Showcase. 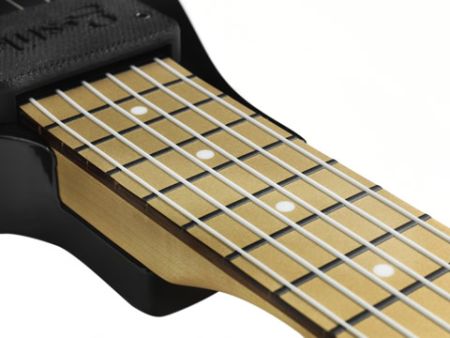