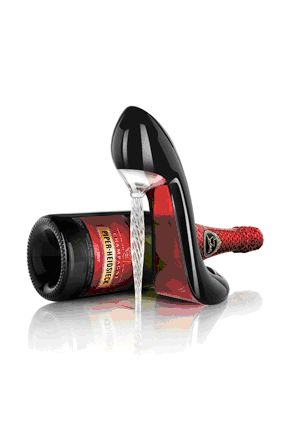 We know what you’re going to say, it’s not even flippin’ Christmas yet! But we’re romantics at heart here at AG and so we had to share this Valentines Day news about the resurrection of an ancient ritual.

Le Rituel is an ancient tradition whereby men drank from a woman’s shoe to declare their love.

The practise was inspired by a Russian ‘ritual’ following ballet performances, where the bubbly-filled slipper of the prima ballerina was raised to a toast by her admirers. It was later adopted in an even more frivolous way in Parisian cabarets during the Belle Epoque period.

Le Rituel is available from Mews of Mayfair, a bottle of Piper-Heidsieck and the Louboutin shoe cost £90. However – despite the price – once you’ve drunk up you don’t get to keep the shoe!

“This is a great way to impress your partner, great fun and a novel way to declare your love,” said Victor Lanson, Piper-Heidsieck’s UK representative.