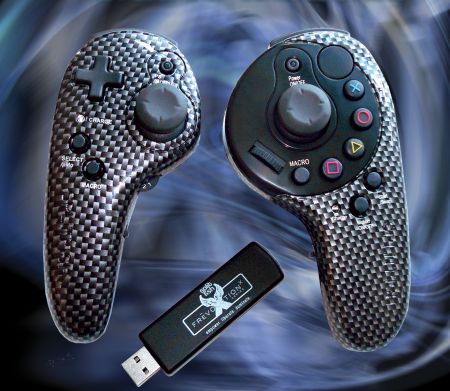 Dual Analogue adjustable split controllers, with motion button triggers. Sounds like a part from a particularly nasty weapons system. Who’d have thought it could be the key to making you a better player at FIFA 10?

Looking a bit like the Wiimote and nunchuck, SplitFish claims its Dual SFX Evolution beats any other controller when it comes to sports and other action games.

That’s thanks to its “level of enhanced, intuitive, performance capabilities”, which were made specifically for fan favourites like FIFA, Madden, H.A.W.X., Fight Night and even Little Big Planet.

“If you want more interaction with your action titles – this is a perfect upgrade or replacement to any standard stick controller for all games,” says an official statement from the company.

“The fully featured controller gives all the best analogue stick control can offer, plus it offers up assignable dual independent wireless motion for sixaxis or analogue stick emulation as well as ‘wrist flick’ button triggering.”

Originally unveiled at E3 and Gamescon 2009 as part of SplitFish’s brand-new Frevolution X System, the company is shipping the controller now and says its will be in stores by end of December 2009.

There’s no official price yet but we have found one for sale here for £111.