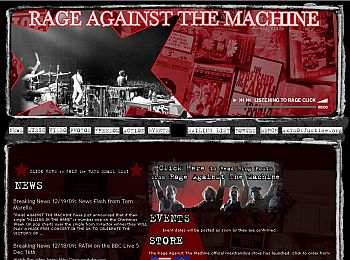 The official UK music chart has never had a Christmas number one that only came from download sales. Until now, that is. Rage Against The Machine nabbed the top spot in a tough battle with X Factor winner Joe McElderry to make the band’s single the first ever download-only Christmas No 1!

Rage grabbed top spot thanks to an internet campaign started by a music fan who was tired of the X-Factor winner’s single taking top spot for the past few years.

Rage started the week clearly in the lead and at one point had opened up almost a 60,000 gap lead in sales.

However, as the week wore on McElderry pulled closer to stealing back the title, coming within 9,000 sales of Killing In The Name on Friday.

In the end, though, Rage Against The Machine was a clear winner thanks to more than 500,000 online sales. That put The Climb by McElderry in second place by 50,000 copies.

Rage’s Zack De La Rocha said the band was ecstatic at being number one and praised the campaign against a “sterile pop mentality”.

The band has donated part of the profits to the homeless charity Shelter and now plan to play a free celebratory gig at some point in 2010.