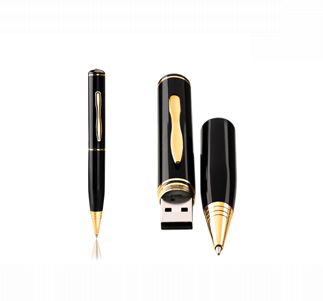 Psssst. They’re watching you. No really, this isn’t the mischievous voices in your head. If someone has a pen, they could be recording your actions or taking snapshots of you in secret. And with Swann Security’s newest PenCam, those images are now a lot clearer…

The PenCam Mini Video Camera & Recorder is – like its predecessors – an all-in-one surveillance system that easily allows anyone to make their own hidden videos.

However, Swann’s new version now shoots both video and still images in much higher resolution.

The PenCam Mini Video Camera & Recorder captures colour AVI videos in 640 x 480 VGA resolution and JPEG still images in 1,280 x 960 resolution, all thanks to a camera concealed in the end of a real working pen.

All footage is recorded on the internal 2GB of memory, which is capable of recording over an hour of video footage or capturing 9,000 still images.

When the memory is full, users simply unscrew the pen and the lower half contains a USB connector that plugs into a computer for easy back-up.

The device is powered by a rechargeable Lithium-ion battery that lasts a maximum of 90 minutes and recharges via a computer’s USB port.

“With increased popularity of sites like Facebook, Youtube and MySpace, our customers are always searching for clever ways to capture and share their memories with the rest of the world,” said Guy Pithie, Swann Communication’s VP for North America.