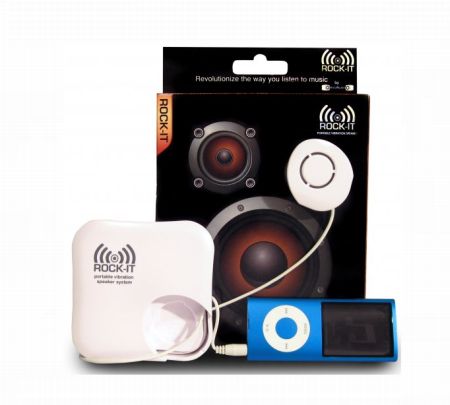 Here at AG we’re used to seeing devices that turn flat surfaces (tables, mirrors, etc) into speakers. But OrigAudio says its Rock-It vibration device turns anything into a speaker…

Unveiled at CES, the Rock-It Speaker System translates music from your device into vibration sequences which transmit to the Rock-It pod.

When attached to any object, the pod then transforms that object into a speaker.

Rock-It is compatible with any musical device with a standard headphone jack and is powered by two AAA batteries or the included USB cable.

The Rock-It pod is two inches in diameter and affixes to any object with the reusable tactile pad, “turning nearly anything within reach – cup, lampshade, cardboard box and more – into a speaker”.

OrigAudio was founded in the past year by two friends with “a vision and passion for music and green living” and the company’s first product, the ultra-portable Fold n’ Play speakers were named one of Time Magazine’s 50 Best Inventions of 2009.