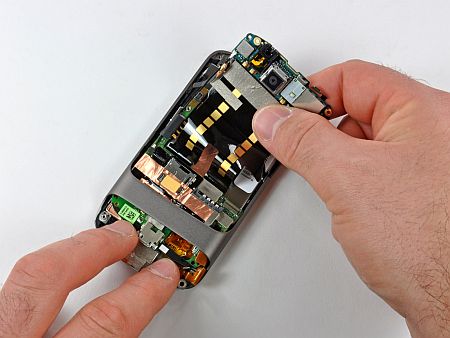 “We heard the Nexus One was developed by HTC under close supervision by Google,” a spokesman for the curious folk at iFixit tells us. “We wanted to see what kind of Google magic lay inside the device, so we took it apart!”

“Once we took the fancy wrapper off the phone, the Nexus One revealed itself to be very similar to other smartphones, albeit with stronger hardware. Its thoughtful internal design did impress us, as did its ease of disassembly,” he adds.

In iFixit.com’s words, highlights from the delve within the case include:
* “The 1 GHz Qualcomm Snapdragon processor is quite speedy. We had a Motorola Droid on-hand for comparison, and it seemed to us that everything went a bit more smoothly on the Nexus One – at least before we took it apart.”

* “This phone is very nicely put together and has no visible screws. Yet, we were able to remove the battery cover, unscrew three screws, and take off the battery holder frame. Depending on the part, the phone can certainly be user-serviceable.”

* “It’s quite a colourful phone on the inside. HTC/Google was nice enough to include greens, yellows, oranges, dark grays, and all sorts of other colours inside the Nexus One.”

* “The 3.7-inch (diagonal) WVGA AMOLED touchscreen is made by Samsung, the same screen supplier as for Microsoft’s Zune HD.”

* Nexus One chip winners include Qualcomm, Broadcom, Skyworks, TI, Samsung, Synaptics, Atmel, and Audience. Qualcomm is certainly the chip winner for the Nexus One, having three of the largest-profile chips in the device: processor, power management chip, and RF transceiver.”

* “The 802.11n capability gives the Nexus an advantage over the iPhone 3GS, which only has 802.11g. The Broadcom BCM4329 chip in the Nexus is the same chip found in Apple’s newest (3rd generation) iPod touch, and also has Bluetooth and FM transceiver functionality.”