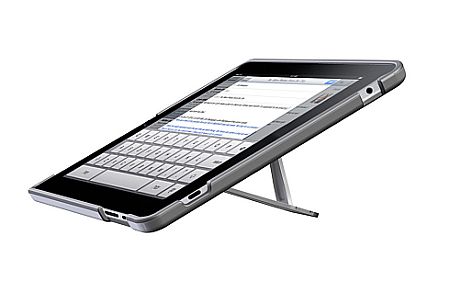 It seems all it takes to send the world into a spin is a new Apple product. Still, you’ve got to admire how quickly it’s possible to be part of a zeitgeist…

For instance, Scosche has announced a shatterproof polycarbonate and rubber hybrid case for the Apple iPad, with integrated kickstand for horizontal vertical viewing and a low-angle setting for typing. It’s called the kickBACK, possibly emulating a press conference conducted from an armchair. Possibly not. It comes with a screen protector and cleaning cloth and will ship in early-mid Spring 2010. Meanwhile, Ten One Design has been quick to announce that its Pogo Stylus and Pogo Sketch products for iPhone, iPod touch and MacBook trackpads are already compatible with the Apple tablet device. They’ll offer “greater operating accuracy, comfort and control”. They both cost 14.95. Also, PixelMags says the unveiling of Apple’s iPad offers “unprecedented opportunity for branded magazine apps” and that “PixelMags and Apple iPad are a match made in digital heaven.” Combined with the large-screened iPad, consumers will have everything a paper publication has with the additional component of multi media applications, the company said.
Back to products, Tom Bihn has introduced the Cache sleeve and Ristretto vertical messenger bag for the Apple iPad. The Cache fits the iPad on its own or encased in its Apple iPad Case, while the Ristretto vertical messenger bag does the same – with a built-in interior padded compartment that protects the iPad. The $30 Cache will ship within 10 days of the release of the Apple iPad, while the Ristretto is available now for $110. Perhaps oddest of all, bookies Paddy Power felt the need to cast on the device’s success. “Following the launch of the Apple iPad in San Francisco today, bookies Paddy Power are already offering odds on the global sales for Apples latest creation,” a Paddy Power statement said. “With its promise of seamless browsing, email, photos, video, music, games and e-books Paddy Power is offering short odds of 11/4 that the iPad will rewrite the history books and sell between two and three million units in 2010 making it the fastest selling device of it’s kind in history.” Of course, this is the company that paid out on Stoke City being relegated after one game of the 2008-2009 Premiere League season (Stoke finished 12 out of 20, 11 points above the drop zone).