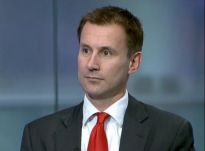 The Conservative Party has pledged to drive Britain’s broadband speeds up to 100MBps in most areas of the country by 2017. The process would see BT’s monopoly over phone lines and cables broken up, with places that wouldn’t see a big return of investment for broadband companies – such as rural areas – funded by the BBC licence fee.

“I think it’s going to make an absolutely huge difference because Britain is one of the slowest countries in the world for broadband speed, we are 21st out of 30 amongst the developed countries,” shadow culture secretary Jeremy Hunt told Channel 4 News.

“We also have some of the most powerful and successful creative industries, whether it’s the advertising industry or the TV industry and this is a huge opportunity when we’re trying to get out of recession. But if we’re going to do that we have to have proper infrastructure.”

The Labour Government’s plans for improving broadband would use a £6 tax on every fixed line phone bill to fund improvements by 2012, with 100MBps in place by 2017.

“The way you deliver this is to recognise that at the moment BT runs the networks but investing in a super-fast broadband network is something that’s just too expensive for one company to do on its own and that’s why you need to open up the market.”