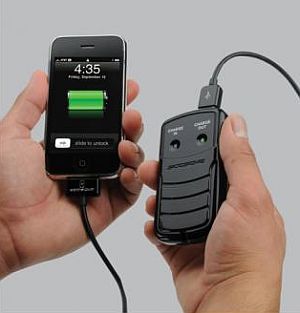 If you fancy juicing your handheld device – Blackberry, iPhone, iPod, PSP, etc – at the same rate as a wall socket but using that lovely free sunshine as a power source, then check out the solBAT II from Scosche Industries…

“The solBAT II’s lithium ion battery has a capacity of 1500mA and an output of 5V, allowing it to charge USB powered devices at the same rate as a wall charger,” said the iPod and iPhone accessories manufacturer.

The device features a windshield mount and a universal carabineer mount to “make it easy to soak up the sun’s clean energy”.

And when fully powered, it will charge a typical mobile phone twice, allowing it to act as a battery backup.

The solBAT II is available now from Scosche.com and at select US retail locations for $29.99.