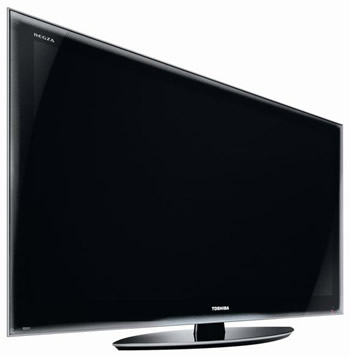 With the BBC and ITV broadcasting in semi-glorious HD on Freeview, Toshiba is to launch a new range of TVs that can receive high-definition terrestrial broadcasts.

With this year’s World Cup in South Africa just around the corner and coming in HD, Toshiba’s new SL and WL series tellies will sport an ‘Edge’ based implementation of LED technology for ultra slim screen profiles.

The sets will also have built-in Freeview HD which will take advantage of the current rollout of services across the UK this year. The sets feature the DVB T2 tuner needed to get Freeview HD.

All sets are capable of displaying in 1080p resolutions and come with four HDMI ports to plug in you Sky HD box as well as your PS3.

the company will also be launching a Freeview HD+ PVR. The HDR5010 comes with two Freeview HD tuners, so you can watch one programme while recording another, or record two programmes while watching a recording.

As well as an HDMI output there is also two HDMI inputs, so you can hook up your console to it as well. It sports two USB ports and an Ethernet port to connect hard drives and flash disks for streaming music or videos, but no current support for the increasingly popular MKV format.

At £349, it ain’t cheap (when compared to the free Sky HD+ box). But there is no monthly subscriptions to worry about either.