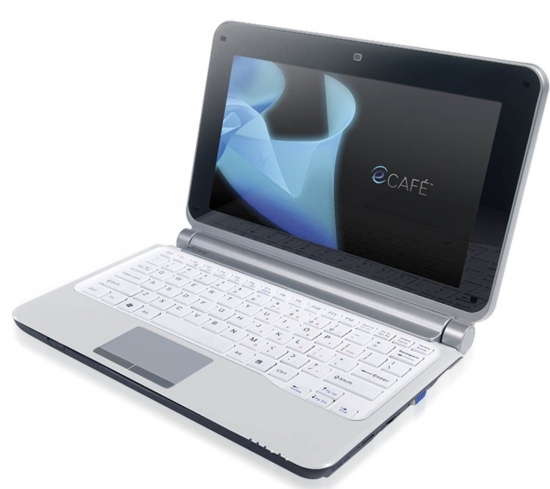 Are netbooks going out of fashion? Hercules hopes not, it’s got one called eCafe it wants you to consider.

As with all netbooks, the eCafe EC-1000W is very portable and is styled presumably for a woman who may not want something in pink (yes it could be for a guy as well if you want).

Opening up the device, it sports a 10.1-inch display and a keyboard that is ok for some light emailing but not what we would use for any heavy-duty word processing. The keys seem to be smaller than the average 10.1-inch netbook and if you have big hands then you may need to look elsewhere (we guess if you have dainty hands this may not be so much of a problem).

Inside it boasts a 250GB hard drive (spinning at 5400rpm – relatively slow compared to others) and has an Intel Atom N270 1.6GHz processor and 1GB of memory. The device also has access to 50GB of online storage via the cloud. Also along for the ride are WiFi (802.11n, a webcam, three USB ports, VGA out and a memory card reader (SD, MMC, SDHC and MS). The battery is a 4400 mAh 6-cell battery.

In use, the screen has a 1024 by 600 resolution, which is much higher than you would normally see on netbooks of this price range and so should be more easy on the eye and better equipped to deal with higher resolution graphics, if it it was capable of outputting in HD, which it can’t really, it’s only a netbook. However, it is quite glossy and the glare in certain conditions will be off-putting.

The sound is passable, volume is high enough to watch video with but with no bass response to speak of, can sound middling most of the times and not rounded.

The unit comes with Windows 7 Starter edition (as do many new netbooks) as well as the normal pre-loaded software that never gets used much. But it does come with the latest version of OpenOffice, so at least you will be able to open and edit those Microsoft Office documents without handing money over to Bill Gates.

As we said before, the keyboard can be a problem for people with big hands and but below the mouse pad is resposive, however the mouse buttons are a little too recessed and you can often hit something other than the utton you wanted to press at times.

Overall, the netbook does well for the price (£329) it is pitched at but if you are a man, if the styling doesn’t put you off the small keyboard might. If you are a woman or just someone with small hands then this could be the netbook for you.