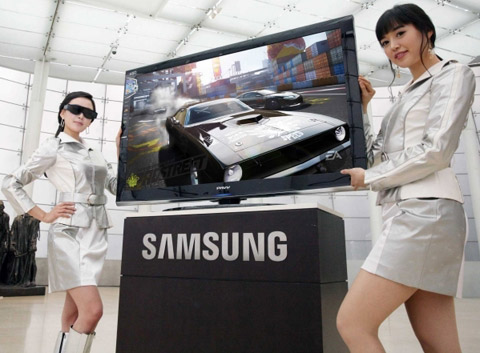 If you want that 3D experience that you had at the cinema but in the comfort of you own living room, then you better have the cash ready soon.

Consumer electronics giant Samsung will be launching its new range of 3D TVs in the UK from March, the manufacturer confirmed. The company demostrated its product back in January at the CES in Las Vegas.

First out of the stalls in March will be the company’s LED 8 Series, LED 7 Series, the LCD 7 Series TVs and the BD-C6900 Blu-ray player. Later on in spring follows the LED 9, the Plasma 7 Series and the HT-C6930W Home Theatre System.

According to Andy Griffiths, VP of consumer electronics for Samsung in the UK, the success of recent 3D movie titles is “building anticipation from people who want to enjoy the richness of 3D content from the comfort of their living room”.

However, there is a real dearth of 3D content available for telly viewers at the moment, with only Sky and Channel Four making stabs at broadcasting 3D programmes. But Samsung said it has new technology that can turn normal 2D content into 3D. “Consumers can add a level of depth and clarity to a live football game, with the simple push of a button”, the company claims.