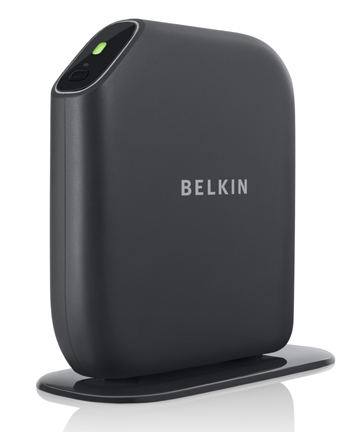 As more of us gadget-lovers go HD in our homes, we find that some wireless and fast Ethernet are just not, well, fast enough. Belkin is aiming to banish juddering HD movies and game lag with new set of routers.

The new Belkin Play Max is said to be one of the first routers in the UK to combine gigabit Ethernet and wireless connectivity in one small box. It sports one Wan and four Lan ports, all running at 1000Mbps. OK, ADSL speeds haven’t reached these dizzy heights, but at least when you are streaming an HD movie from your media server it shouldn’t stop every five seconds.

As well as gigabit, it also boast wireless-N connectivity with speeds of up to 300Mbps as well as B and G.

The router also allows for the connection of up to two external hard drive or printers.

The Play Max has also taken a leaf out of Apple’s playbook with little apps that extend the functionality of the router. These include Bit Boost that sets up quality of service for certain types of traffic and Torrent Genie which manages torrent downloads while you PC is switched off.

Also featured as apps are Daily DJ, which automatically compiles personalised music playlists, and Music Labeller, which can fill in the blanks of you music track information.

Belkin also claims that its new modems are 60 per cent easier to install than earlier models.
The three main models cost the following; Surf, a simple four-port wireless-n modem router at £69.99; Share, which adds a USB port and VPN support, for £89.99; and Play, a dual-band device for £99.99. For power users, the Play Max at £119.99 includes two USB ports and gigabit Ethernet. Cable versions (sans ADSL) of these routers costs £20 less.

The routers should hit the shops early May.