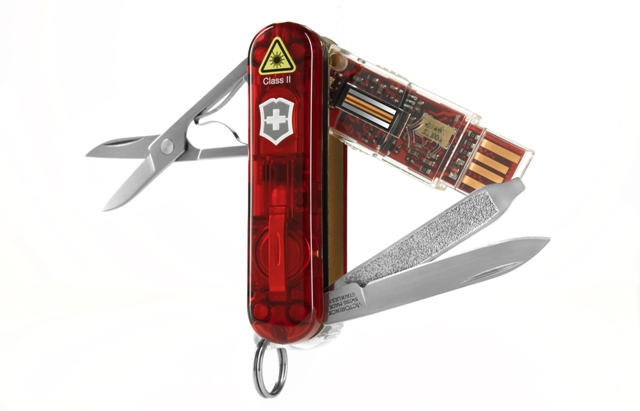 Somewhat of a leftfield entrant into the arena of USB sticks, and secure ones at that, Victorinox has thrown down the gauntlet to hackers to see if they can break into one of its products.

The Swiss army pen knife makers has come up with a new range of pen knives with a USB memory stick inside. Somewhat like a mini-Fort Knox in your pocket, the new Secure Pro boast fingerprint biometrics, AES256 encryption and a little tool to get stones out of horses’ feet (probably!)

The makers are so confident that no-one can break into the security of the flash drive, it has put up a £100,000 prize to anyone that can gain access to the flash pen.

The competition started on Thursday and runs until Friday. Hackers coming into the New Bond Street branch of Victorinox have two hours and a PC (and the secure stick) to hack into the security of the device.

The makers ran a similar competition earlier this year at CES, where no one was successful at circumventing the technology.

The fingerprint scanner not only uses a person’s fingerprint to identify them, but it also sports oxygen and thermal sensors to make sure it is a live finger and not someone doing a “Demolition Man”-style job with an amputated pinky.

The security is all on a single chip (MKI Schnuffi Platform) to stop hackers from intercepting data on a circuit board. The thing can also self-destruct if the hardware is tampered with.

Victorinox Secure’s designer Martin Kuster, a technology security specialist said, “Life is becoming more digital every day,” says Kuster. “And yet people do so little to protect their data. The world’s most common password is ‘12345’ – and even encryption can be broken given time.”

The Secure Pro is available in three different sizes, ranging from 8GB to 32GB RRP £50 – £180 and features: