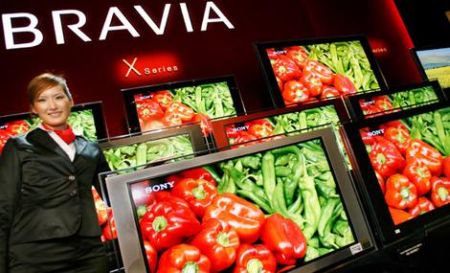 Television and games console manufacturer Sony has announced plans to roll out its new range of 3D televisions in the UK.

Its HX803 3D ready TVs will be on sale from June. Howeve, unlike its American counterpart, this version of the box comes without battery-powered 3D glasses, which will be needed to watch the 3D content.

Consumers will be forced to buy separate accessory packs. But better news for PS3 owners is that with the telly comes vouchers for download codes that will upgarde current games to stunning 3D. These included Wipeout HD, Motorstorm Pacific Ridge (demo) and Super Stardust HD.

The price of the TV is yet to be announced, but expect there to be a premium for the 3D element.

Meanwhile the company is also gearing up to make its PS3 consoles 3D. The company plans to release two firmware updates that will enable games to enjoy their games in 3D.

The first update will come before June so that consoles will be able to play 3D-enabled games via an appropriate 3D TV.

Another update, scheduled for some time later in the year, will allow the console to play 3D Blu-ray movies.