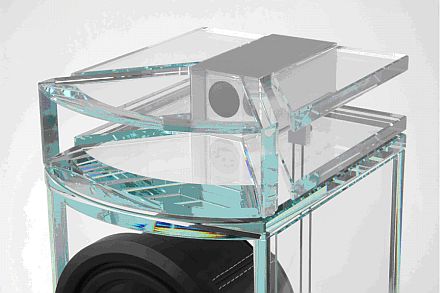 French hi-end speaker designer Waterfall Audio has announced that its flagship range of Niagara speakers is finally being released in the UK. The floor standing speakers retail at £25,000 for the pair.

So what does your £25K get you? Well, the cases are made of three-quarter-inch-thick diamond glass, standing 3-foot 11-inches tall.

For those wondering what diamond glass is, it’s a different colour from regular glass as the material has been treated at high temperatures for “maximum clarity and transparency that allows the speaker’s drivers to appear to float in mid air.”

“Aptly named after the great Niagara Falls, the Waterfall Audio Niagara speakers are a truly awesome sight,” says a modest press release, which also states that the speakers not only take their places amongst “top French design icons such as Lalique and Cartier or furnishings in the Louvre, but also amongst some of the most ground breaking pieces of style-based technology the world has seen to date.”