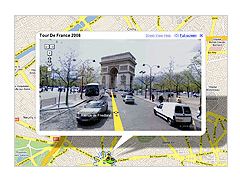 Google has revealed that its Street View cars have been collecting more than images of houses and roads, as a piece of software in the system has also been accessing personal data on unencrypted wireless networks.

“It’s now clear that we have been mistakenly collecting samples of payload data from open (i.e. non-password-protected) WiFi networks, even though we never used that data in any Google products,” said Alan Eustace, Google’s senior VP for engineering and research.

Google had previously admitted it had used its cars to collect Wi-Fi network names and MAC addresses, but claimed no sensitive information had been accessed.

The search company now says that a piece of code written in 2006 by a programmer working on a separate Wi-Fi project was accidentally included in the Street View system and it’s this that collected the data.