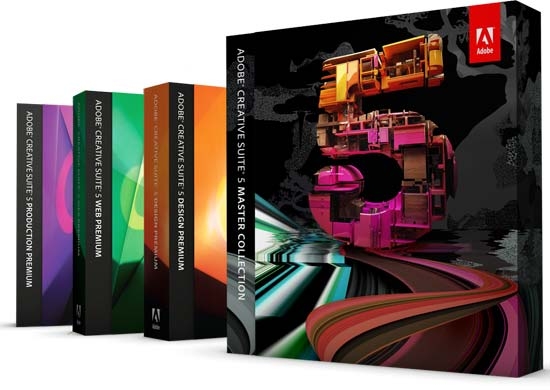 Adobe’s Creative suite has been going a fair few years now and each new version seems to get better and better. This latest version (Creative Suite 5) ups the tempo with some apps for Flash.

The software comes out at the end of May and has revamped many versions of its arts, design, video and animation tools as well as adding two new web-design applications, Flash Catalyst and Flash Builder.

There are new tools to improve art, such that new 3D extrusion tool Repoussé and more behind the scenes aids that will increase productivity.

Another feature is the increase support for 64-bit computing on the Mac (Photoshop is new 64-bit native on the Mac, joining its Windows cousin). Other 64-bit applications include After Effects and Premiere Pro.

In version 5, the interface has yet again been adjusted to make things run more smoothly, either on their own or in tandem with other tools. These include include a slimmed-down version of Bridge (called Mini Bridge) that works within Photoshop CS5, Photoshop CS5 Extended, and InDesign CS5, offering image access and management.

Each of the applications can be bought separately or bundled together. The Master suite includes just about everything.

On next page our review of Photoshop CS5.

Adobe seems to be increasing the rate of accelaration on Photoshop with more than a few new features that will make you gasp with excitement.

There is a new Mixer brush which is a new paint system with a “wet” canvas so that artists can pick up multiple colours using a single tip and blend them with what is on the canvas already.

There is also a Content-Aware Fill tool that can remove pars of an image and fill the space underneath with matching tone, lighting and noise.

The application gives photographers something to play with as the lens correction filter fixes three common problems camera have with lenses: geometric distortion, chromatic aberration, and vignetting.

One feature of note is Repoussé. This allows you to extrude text to create 3D lettering and logos. This can be then dropped into a different mesh or material. There is also the Shadow Catcher, which can generate and sadjust shadows on the ground plane of a image.

There are new Distance and Blur controls that can create depth-of-field effects by altering the zone of sharpness.

One of the new features of Illustrator is the Perspective Grid tool. This lets you use a grid to support drawing more accurate linear perspectives. You can creat objects in one plane and apply them to a perspective plane, letting Illustrator do the work of fitting it into the correct shape.

There is also a bristle brush that allows an artist a realistic brush stroke. The control of painting is more than adequate. It allows colour blending and characteristics of the bristle such as
size, length, thickness and stiffness. You can even set the brush’s shape and bristle density.

The new Align to Pixel Grid option makes prepping images for the web easier. It offers anti-aliasing character options and nine-slice scaling, letting you to resize symbols while keeping proportions.

In CS5, users can work on 100 artboards of different sizes within a document and there is an artboard panel where boards can be added, deleted and duplicated.

InDesign has had tons of improvements over CS4 most of them small and quite unnoticeable until you need them. These additiions have been put in to make getting a page out as effortless as possible.

The Selection tool rotates frame quickly and you can scale and position frames quickly using the on-screen handles.

Another useful feature is persistent frame fitting, which keeps the relationship between frame and image even when the dimension of th frame and the white space changes. The new controls make changing the look and feel of a frame as you go very easy indeed.

There is support for different page sizes within a document and the application now installs packaged fonts automatically when you open a packaged document.

A useful attribute in InDesign is the Span Column paragraph. This means that a headline or crosshead can span two columns. The Split Column atrribute, err, splits columns as its name implies.

It is now a lot easier to create interactive pages as the controls have been organised into new Animation, Object States, Timing, Media and Preview panels.

DreamWeaver forms the backbone of the Web Premium collection and integrates with BrowserLab, which is part of the new CS Live service and features web page previews and local content with multiple viewing and comparison tools.

This application virtually created the web as we know it and any have used it to produce web pages. However, content management systems have threatened it with making it insignificant but this hasn’t stopped Adobe from trying to make the warhorse relevant.

More significant are the fewer steps involved to get up and running with site development. Just a name and a directory and you are good to go.

The new document command has been reworked nad now comes with a new range of CSS layouts for you to tweak. These choices allow you to specify your platform, be it static HTML-based pages or dynamic pages based on ASP, ColdFusion, JSP or PHP.

Among the biggest change is wen you navigate to the app’s Live View mode, which lets you see your site rendered through a WebKit browser engine. Turning on split viw allows you to see browser code that is used to render the page, highlighting code changes as you move your mouse over the page, making inspections and debugging faster.

There is also Live Navigation, which gets around the problem of viewing dynamically-generated pages from a CMS. This offers users the ability to author and test CMS systems such as WordPress, Joomla! and Drupal. The Dynamically Related Files feature allows access to a page’s dependent files and Live View renders the page as it will appear in a browser, complete with dynamic, database-driven content and server- and client-side logic.

This new version allows developers to output Flash projects as an iPhone or other smartphone app (not that Steve Jobs will allow this). This really lets Flash developers the keys to build real apps.

It also improves ActionScript editing and with CodeSnippets coding with Flash becomes easier.

There is also two new features included in Flash: Flash Catalyst for designing desktop applications and Flash Builder for coding apps for AIR.

Premiun Pro is the go to application for editing video. IT is now a native 64-bit system architecture and the new Mercury Playback Engine improves the performance for editing high-definition content. There’s also better support for a range of formats.

It also handles metadata better. Its OnLocation feature records metadata as you shoot, allowing you to search quickly for clips as you edit. It can also transcribe spoken dialogue into metadata.

After Effects also gets the 64-bit treatment and is faster for it. Compositiing and editing are much faster, thanks to the new Roto Brush feature.

Refine Matte, takes the abilities of Roto Brush and applies them to any layer with a difficult alpha channel (such as keyed footage). After Effects CS5 also has an Auto-keyframe mode, where changing a property automatically turns keyframing on and adds a keyframe at the present time.

More formats are also supported in this release and XMP metadata support is also thrown in.

Overall, this is a definite purchaser for any creative professional looking to upgrade from CS4. It is down to what you need from CS5 which will govern what range of applications you will purchase. Each application seems to have new features that users will no doubt find useful.