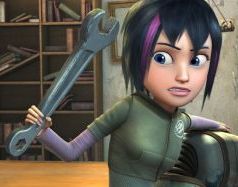 Blonde Beauty Kristen Bell trades her trademark locks for a brown bob in animated adventure Astro Boy – out on DVD and Blu-ray today. Here she tells Absolute Gadget how she’s connecting to the world through social networking…

You’re very active on Twitter aren’t you?
Semi-active. It’s been really nice. I’ve never understood that world of communication as well as I do now. I never had a Facebook page or a MySpace or any desire to. It felt like more of a burden. I feel like I can’t call all the people back who leave messages on my answer machine. I’m barely keeping up with that why would I want another? Then I found out that my father twitters often and I thought, ‘What could you possibly be talking about?’ And apparently he’s got a lot to say which is great and he taught me how to use it and set up an account and I’ve found it to be a really nice way to connect with people who I wouldn’t normally connect to. It’s a little overwhelming because you get a lot of messages. You could get 1000 over 20 minutes but once you sort of acknowledge, ‘Ok, I can’t answer everyone and I’m not expected to’, it’s okay. I scan them for sweet ones or ones which I can see are from kids. It’s a nice way to have some one on one contact with someone and get a little fan time.

What do you do when you’re not working or tweeting?
I cook a lot. That’s kind of it. I’m in a phase right now where I’m making things solely based on pictures from the internet. If it’s a pretty enough picture I’ll make it. But I had a lot of friends who were sick recently so I made chicken soup from scratch which was good. And I also made a vegetarian version for me.

Astro Boy is released on Blu-ray and DVD today.