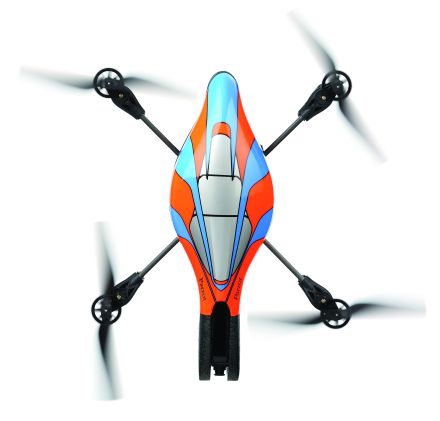 Eagle-eyed readers will recognise this little beauty from the Computer Electronics Show earlier this year and the big news is that it’ll be available in the UK from 18 August for £299. HMV will be stocking the Parrot AR.Drone, which as well as flying incredibly well also allows you to play videogames!

At the launch, Parrot MD Henri Seydoux said the additional element would keep kids from “sitting at home eating chips and playing videogames”.

He also talked up how simple it is to use, with “no mechanics, you don’t have to move blades. And you don’t need to be a pilot and understand the physics of taking off – it can fly itself.” Having tried it out last night, we can confirm how easy it is to control.

What you need to know:
* The AR.Drone creates its own Wi-Fi field to connect to the Apple products and allow it to be controlled.
* A sensor monitors the altitude of the flight and the height of its hovering can be limited using the associated app.
* The camera displays its images on your iPhone, iPod Touch or iPad screen and the device has two different image processors – one for when the drone is stable and one for when it has some speed.
* An outer shell can be fitted for inside use and is made of the same stuff as your car bumper. “It’s important to have the drone as strong as possible so children can play with it,” Seydoux said. * As a safety feature, all the propellers stop if you catch something like a finger in one of them.
* It only has a 12-minute battery life but additional batteries can be bought and swapped out as needed. This process looked fairly easy.
* There’s no Android phone version yet. However, Seydoux says: “There’s an open dev kit on the web so if you want to develop something for it you can.” This will also allow extra games to be developed for it.
* You can’t save the video footage yet. “Video sent from the drone to the devide, we have no intention to record it,” Seydoux added. Another one for the dev boys and girls there…