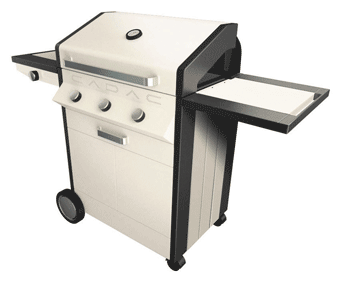 It’s summer and it’s time to get out and start BBQing. But can South African BBQ specialists Cadac with its Meridian 3 gas BBQ get your juices going?

The Cadac Meridian 3 is a three burner gas BBQ that comes supplied with one fold-away side table and one fold-away side burner. It has a 63cm x 48cm cooking grid with high-performance 304 grade stainless steel burners and automatic piezo ignition for each burner. Above the burners is a fixed food warming rack.

The skin of the BBQ is made from rust-proof stainless steel and our test one came in white. The whole thing can be moved around thanks to its two large rubberised wheels and two castor wheels.The dome is double-skinned to keep heat in when the lid is down and you can check the temperature of the grill thanks to a surface mounted thermometer. The dome can be raised to reveal the grill inside and is compact so can be placed up against the wall and still be operated.

Underneath the burners is a double-skin storage cabinets with push-release magnetic doors.

The BBQ comes self-assembly and the manual is reasonably easy to follow, although when assembling, we didn’t realise that we were following the instructions for another similar BBQ in the Cadac range which meant that we had to partially disassemble the BBQ and then re-assemble with the correct parts. Overall, it took us the best part of three hours to put together. But once done, it looked the part.

As mentioned before the lid (or dome) of the BBQ is compact so can be lifted while it is positioned against a wall. And storage beneath is very large, so can hold a lot of BBQ tools and food.

The BBQ can take both butane and propane gas cylinders. Our test BBQ didn’t come with a hose so we had to source one ourselves. Once found, this was quick to rig up and get the gas light up.

There are three burners, two for a grill and one for a hot plate. The grill and hotplate rest upon the BBQ and can be easily removed and put in a dishwasher, which makes cleaning much quicker than having to scrub for an hour.

Firing up the BBQ is very quick, but we did notice that there appeared to be a cooler spot towards the front of the BBQ and meat didn’t cook as quickly as it did in the middle or rear of the BBQ. But the grill area is big enough anyway so as to not present too much of a problem. Cooked meat can be kept warm on the rack above, which is generous and can hold quite a few sausages and drumsticks.

Overall, we were very impressed with the BBQ and its looks mean that is will complement any stylish garden or patio. The Cadac Meridian 3 gas BBQ is available from Amazon priced £400.00