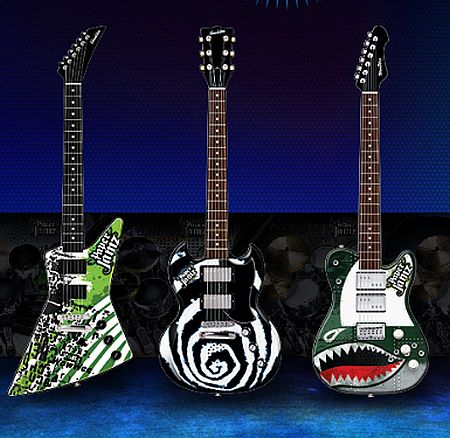 “They’re an absolutely fantastic musical gadget!” the spokesman for WowWee says of its Paper Jamz range, “and a fantastic introduction to music making for anyone.” And the innovative selection of flat, ultra-thin rock guitars and drum kits that are played by touch alone (with no moving parts) certainly sound like they fit that description.

The instruments are created using feature circuit-embedded paper, meaning the touch electronics is actually in the paper surface of the guitar and drums.

“That allows us to create ultra-thin instruments that pack a serious sound,” the PR adds.

Paper Jamz guitars are fully playable and offer over 30 major, minor, sharp and flat chords, despite being as little as 3mm thick.

There are five designs in the range and each features a built-in speaker to pump out the tunes and three built-in songs to jam along to (choices include Smoke on the Water, Born to be Wild, You really Got Me, Blitzkreig Bop and more).

Paper Jamz drums will feature the same paper-thin technology later this year to create a fully playable 10 piece drum kit. That includes cymbals, bass drums, high-hats – without taking up an entire room! We have also just revealed a range of mini amps (£15) which again look just like the real thing only smaller. These will launch at the same time as the drums.