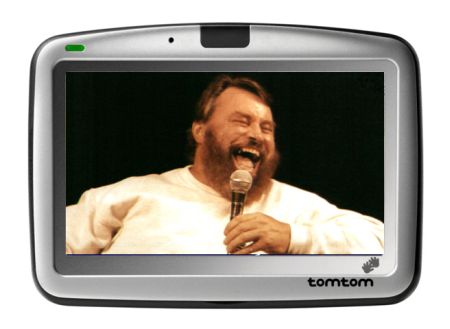 Motorist Richard Gardner from Saddleworth, Manchester decided he wanted his driving experience to be shoutier and more beardy. But when he discovered that the booming voice of king-sized actor Brian Blessed was not available on his TomTom sat nav, he decided to set the wheels in motion himself.

He set up a Facebook group called “Campaign to get Brian Blessed to do a voice-over for my sat nav” in April 2008 – and then promptly forgot about it.

In February 2010, he revisited the group to find it had 450 members. Realising there was some demand for the voice he proceeded to spread the word and within weeks attracted several thousand members.

As the petition gathered momentum, Gardner contacted TomTom who said they would open negotiations with Brian Blessed if the group attracted 25,000 supporters.

So Gardner approached the big Yorkshireman himself, who agreed to film a campaign video and lend his voice if the target was reached.

The group now has 25,772 members and TomTom has confirmed that the Official Shoutsperson of the University of York Douglas Adams Society will be the new voice of sat nav from October.

“I believe this is the first time that a product has been created through social media,” Gardner said.

“Companies have been spending so much time and money trying to work out how to use Social Media to sell us stuff, I wondered whether it was time they started thinking about using it to ask us what we’d like to buy?”