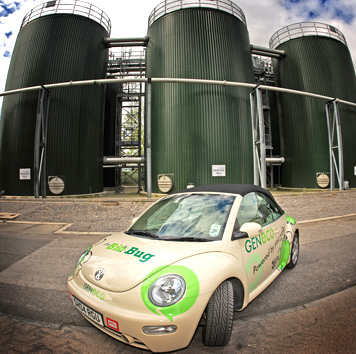 It sounds like a rejected script for an episode of South Park, but a car powered by methane is currently roaming the streets of Bristol.

The Bio-Bug is a modified Volkswagen Beetle that runs on processed methane generated as part of the process of treating raw sewage. Engineers at Wessex Water estimate that the annual waste from 70 average households could fuel the car for 10,000 miles.

Despite the origins of its fuel, the Bug doesn’t smell. “It performs like a normal car – you wouldn’t know it was powered by biogas,” a company spokesman said.

The methane has to be treated to remove carbon dioxide in order for it to be a safe, reliable fuel, and so GENeco, part of Wessex Water, imported specialist cleaning equipment for their Avonmouth site – one of the UK’s biggest sewage treatment plants.

“Our site has been producing biogas for many years which we use to generate electricity to power the site and export to the National Grid.

“With the surplus gas we had available we wanted to put it to good use in a sustainable and efficient way.

“We decided to power a vehicle on the gas offering a sustainable alternative to using fossil fuels which we so heavily rely on in the UK,” added the spokesman.