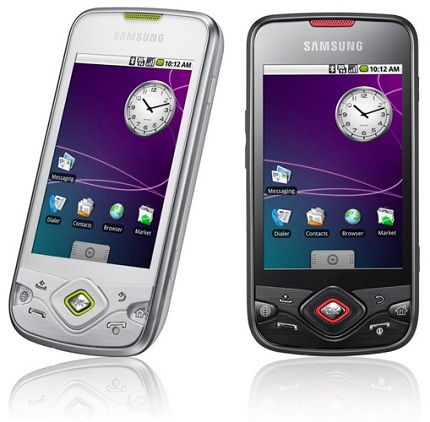 Up until now Samsung hadn’t bothered the Android fraternity too much, but is making up for lost time with its Galaxy Portal.

The second Android-powered smartphone out of the Samsung stable, the Galaxy Portal lacks some of the features that was in the original Galaxy and has also changed the design as well.

Instead of a rectangle button, the Portal sports a diamond-shaped navigation key just below the display. As far as hardware buttons are concerned, there are quite a few filling up the phone. There’s the home button and back button just under the display, answer and call end buttons plus a home key and search button beside them.

These buttons are big and make you wonder if the phone is aimed at rugby players or the elderly. On the side are the screen unlock key, volume controls and a camera button.

As this is a cut-down Android phone, (but not a budget phone) it has a TFT screen instead of AMOLED. The latter working better in sunnier conditions (in fact the phone is nearly unusable in bright sunlight as this reviewer found out when taking the phone on holiday).

And while the screen is capacitive (instead of resistive) the screen should be more responsive. In out tests it was just about slightly better in use than a resistive screen used on the Vodafone 845. But at least with a a 3.2-inch screen, it is big enough to see when in the shade.

The virtual keyboard also doesn’t feel as responsive as others we have tested in the past. Many a times we have had to hit the delete button when the wrong letter came up. The HTC Hero worked better than this in testing. It works better in landscape mode than it does in portrait mode, making two hands necessary to operate effectively.

Another difference between the Galaxy and its Portal brethren is storage. The higher-specced Galaxy boasts 8GB of storage while the Portal only manages 180MB. But there is space to slot in a 32GB MicroSD card which should alleviate that particular problem.

The Portal also runs Android 1.5 so it misses out on the substantial changes the 2.0 upwards brings. It would have been good to test this out with an update but in the time we had to review it no update came. Multi-touch is also missing which makes operation less easy as well.

Despite having a Qualcomm 800MHz processor, the Portal seemed sluggish at times, especially when opening Facebook. Also, downloading is slow as well.

The camera is a 3.2-megapixel affair, which is not too bad but suffers in comparison to its older sibling’s 5-megapixel camera. Photos seems a tad blurry and took a while to capture with the shot taken well after the moment had gone.

Battery life manages to last most of the day, although this seems to shorten on train journeys as the phone tries to pick up constantly changing signals.

Overall, not a bad phone when for free on contract. Although we’d be tempted to put in some upfront investment and buy a more powerful phone.