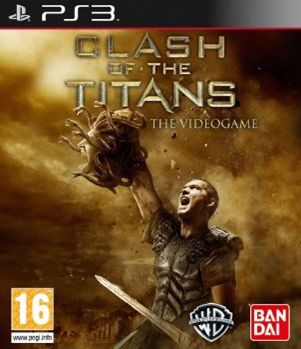 Movie tie in games. Chances are, that very phrase already has your expectations lowered. Can Clash Of The Titans buck the trend of poor film-to-game conversions and win you over with it’s mix of mythology and action?

Sadly, the answer is a resounding no. As so often happens, Clash might look pretty and boast more monsters to spar with than even the film could throw up, but it has all the hallmarks of a rush job.

For starters, there’s a failure to the plot’s internal logic (anyone who’s seen the recent film will also recognise that the story’s slightly different right from the off). An early task sees you clear the mountains of monsters to stem the fears of your kin, ending with you declaring it free from foes. Then the next task sees you head up the same mountain and encounter more of the same monsters. Not so clear then, huh? Follow this with a request to join the royal guards on a visit to see the Stygian Witches in a race against time to save the princess from the Kraken. Although, it’s not that much of a race against time if the guards can pointlessly test you with menial tasks, including a turn on night watch and a wrestling match with city folk about to riot.

That lack of cohesive story is further hindered by a game world which constantly restrains your Perseus avatar – you can’t move between pillars, you can’t head onto higher ground that looks like it should be accessible, and you certainly can’t leave the current room until you’ve spoken to the right person. “Where are you going?” the PC’s characters will say as you try to walk away from them, making this feel a bit like an out-of-date point-and-click adventure. In the end, you can’t help but give in and curb your need to wander off-map.

The controls also lack an intuitive feel – this is the kind of game that knows you want to climb the wall because you’re standing next to it, but still makes you push the X button to start that ascent. Add in cut scenes and general voice acting that lack the necessary drama, as well as unskippable scenes with annoying dialogue to click through if you re-start a task and the frustration starts to build.

Where the game seems to have focused its talents (aside from some cool monster types) is on a gameplay system that aims higher than a button-mashing hack ’n’ slash. This gives Perseus a mass of upgrade and fighting options, with special moves for each weapon type and the need to master all of them to defeat upcoming enemies. His main sword attack is bolstered by a sub attack that comes from those additional weapons and a killer move that requires you to hit a target inside a circle (sometimes a number of times) to take out a foe in a single hit. Do this perfectly and you’re rewarded with more materials to upgrade those weapons.

Unfortunately, this also quickly becomes a bit of a trudge and the need to hit the target over and over again eventually makes this seem like a less sophisticated battle system, defeating the point. The mass of upgrade options also go way beyond an element fun and if you’re like us you’ll find yourself skipping them until they’re absolutely necessary to defeat the big bad guys.

If you’re looking for a brighter note in Clash Of The Titans, then at least Bobo the mechanical clown gets better treatment than in Louis LeTerrier’s film, where he’s unfairly derided. In this game, he’s your save point and you’ll be glad to see him. But not so glad you’ll pop round to visit him the second a better game comes along.