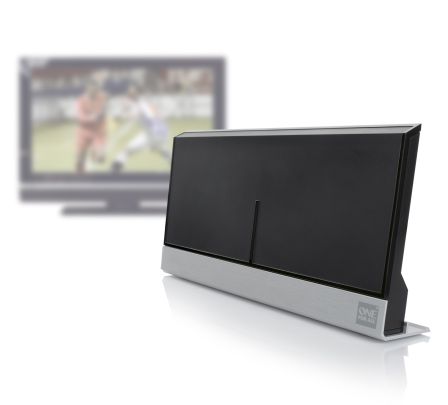 The challenge: turn the poor TV reception of a London flat with no access to an outside aerial into a televisual delight for its inhabitants. The challengers: the classic £14.99 ring aerial every student has owned at one point and the £39.27 powered One For All HD Aerial. So, how did they stack up?

First off – wow, what a dream review – finally something we can just plug in and tell if it works or not. Of course, being technology, it’s a little bit more complicated than that…

This test needed to show how both aerials affected the digital TV receiver that comes as part of a digital television, as well as the TV channels that are received through Tiscali’s recordable digital box.

In the first part of the test, the traditional aerial found 97 services and 67 channels on our DTV. Of those, the main channels faired best, benefiting from the better transmission signal in the London area. Some of the lower ITV channels are a bit choppy, as was Davejavu. Surprisingly, on this occasion E4+1 was in attendance, but Channel 4+1 was missing presumed lost somewhere in the atmosphere. It’s the too-frequent omission of these two channels on Sunday mornings that pushed for a change of aerial in the first place – who wants to watch Hollyoaks in real time when you can get up an hour later?

So, was the One For All HD Aerial an improvement? Plugging it in didn’t immediately fill us with confidence, as there’s not even a little light on the front to show this powered aerial is actually working. On the plus side, you’re not paying to power that little light. On the downside, how will you know if the fuse in the plug blows?

As for performance, it managed to find the same amount of services, so no bonus there, but it did manage to add two more channels – including Channel 4+1 – to take the number to 69 in total. The poor signal affecting many of the minor channels was also noticeably reduced, even if the poor general reception in the area means it wasn’t eliminated completely.

Trying the same test using the TalkTalk+ box (which normally provides the TV channels in the household) was an eye opener. The standard aerial missed out ITV2+1, C4+1, E4+1 and a few others in its channel sweep. Signal strength was also poor on those channels it did pick up – and for many of them it displayed a phone symbol, indicating the TalkTalk+ box would use the internet connection to deliver the channels. That means you can’t turn over to certain channels if you’re already recording something using that connection.

However, the One For All Aerial delivered wildly improved results on the TalkTalk+ box. Only ITV4 and Film4 displayed the phone symbol and almost every channel showed a 90 per cent signal strength, if not more.

So, did the powered One For All SV9380 Full HD Aerial justify its higher price? With a small improvement on the selection of channels on a DTV receiver and a huge improvement on the Tiscali receiver, it wins out as a great option for those who can’t access an external aerial.