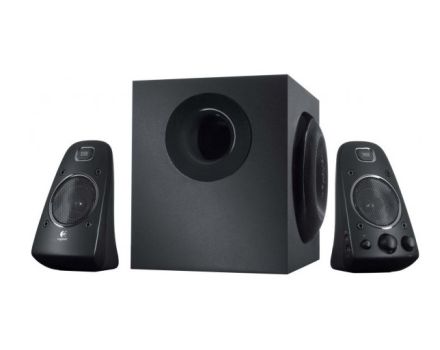 It takes over 400 acoustic and electrical bench tests to meet the strict THX standard, so Logitech is proud of its passing grade. Its new THX certified Z623 Speaker is a 2.1 system that connects to up to three different devices at the same time and offers 200W (RMS) of power.

“The result is front speakers that deliver dialogue and ambient sounds so clear it’s like you’re on the set of your favourite film,” the press release states. “And you’ll hear powerful, deep bass from your subwoofer as it recreates the roar of a jet engine or the sound of a collapsing bridge.”

The system includes:
* RCA and 3.5mm inputs
* Built-in headphone jack
* Integrated controls on the right speaker satellite to dial the volume and bass up or down.

Marcus Harvey, Logitech’s UK & Ireland Country Manager said the Z623 was built so you can lose yourself in whatever you’re into.

“Whether you’re listening to rock music, watching a Steven Spielberg movie, or playing your favourite videogame, the experience is always richer when you get engrossed in the audio,” Harvey said.

The Logitech Speaker System Z623 should be available in the UK in September for a suggested retail price of £149 including VAT.