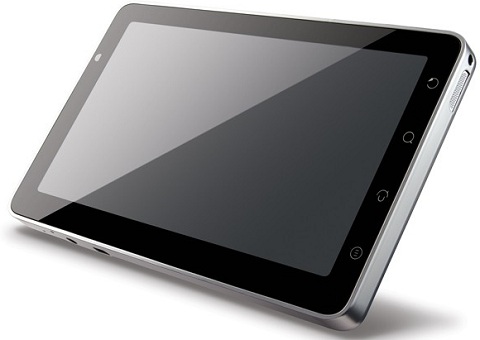 Android-powered tablets are coming thick and fast and flogger of decent monitiors ViewSonic isn’t slow on the uptake. Its released a new tablet and its yours for £350.

The Viewpad 7 (no idea what happened to the other six) was unveiled at the IFA show in Berlin, Germany where the company lifted its hem to reveal further details.

The tablet will come installed with the latest version of Android, Froyo (version 2.2), but it will also sport a 3G sim card slot as well as a 3-megapixel camera and a front-facing webcam.

Unlike a lot of other iPad rivals (and the iPad itself) the Viewpad can make and receive voice calls if you have a Bluetooth headset connected.

“We are proud to announce another world first at Viewsonic. 3G phone functionality combined with dual cameras gives the ability for use of Android apps to use augmented reality or video calling on the move with the benefit of an excellent 7-inch screen,” said Derek Wright, European product marketing manager.

The tablet should be available from October 2010 for £350. There were no details on whether this will be bundled on mobile phone tariffs.