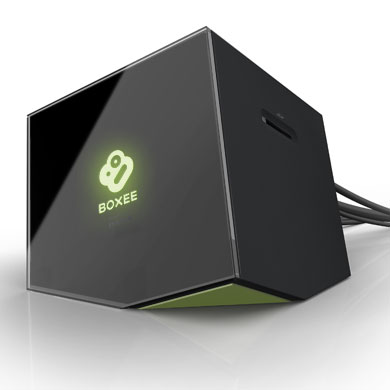 With Apple TV announced just the other week, it wouldn’t take long for a rival streaming TV device to follow. D-Link has announced when and where you will be able to buys its Boxee box.

The Boxee Box is named after the media centre software it runs on and sports an Intel CE4100 system-on-a-chip processor.

The Intel chip is that same that has been touted or Google’s set-top box, which itself should soon see the light of day.

Launching in November for the princely sum of £199 (twice the price of Apple TV), the Boxee Box will come with a library of material from BBC, ITV, Channel 4, Comedy Central, MTV Music and CNN. It will also feature internet apps from Facebook, YouTube and Last.fm.

It has an HDMI port, which will stream pictures in 1080p, optical out and two USB ports for connecting external hard drives. It also has an SD card slot and a full QWERTY remote control.

According to Chris Davies, General Manager, D-Link UK & Ireland, it will support a large number of file formats “making it easy for users to stream their personal digital content such as music, video and photos.  The great thing is all of this can be done from the comfort of a user’s living room, making it the must have product for today’s Digital Home.”

The unit will be available from Amazon this November.