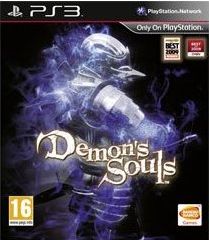 Demons Souls is hard. Scratch that, Demon’s Souls is extremely hard. It’s very probably the most hardcore RPG ever coded. But that’s not to say it isn’t fun, rewarding and brilliant at the same time…

Some of you will read our opening statement and think, “It can’t be that hard. I reckon I could hack it.” But you’re wrong, you can’t. You see, the rub here is that the game’s developers are expecting you to die! And die. And die. And that’s immediately clear from the first boss you encounter, which strips away your body and leaves you as a wandering soul in a world overrun by demonically possessed foes. You can get your body back by squishing a major demon or finding an item to restore you, but that’s no guarantee you’ll hold onto it for long.

The whole death thing takes a bit of getting used to, a bit like the fact that sometimes you have to run from the zombie horde rather than stand and fight in a Resident Evil game. Yes, you’d rather be mixing it up in a hack ‘n’ slash or spell-hurling stylee, but get killed in this game and your current stash of souls will be left where you stand and can only be collected when you’ve battled through to the same point again. In that sense, casual gamers beware: this is your own personal hell. No post-pub mashing of buttons here, this is deadly serious – with the emphasis on deadly.

Nothing is as you’d expect. You can’t simply collect up weapons and armour and trade it in for better stuff – it has no value. The only currency here are the souls of the title and you’ll initially be trading those hard won points for weapon repairs and upgrades. You can’t improve your character until you’ve defeated the first boss and it’s unlikely you’ll do that until you’ve souped up your weapons and picked up some very useful items hidden around the place.

And those who have never bothered cabling up their PS3 or sorting out that Wi-Fi connection will need to get to work before loading up this bad boy. Play Demon’s Souls offline and frustration (and possibly madness) ensue. You’ll be happily wandering around, slowly peeping around corners to watch for foes, only to stumble into something you really should have left alone that tears you a new one.

Play Demon’s Souls online and you’ll be wowed by the difference. Other players leave life-saving messages on the ground, such as: “Beginners should try this area later” (helping you avoid that very big black knight you had five attempts at beating because you assumed you could take him) or “Use [add a relevant weapon here] on the next target” (letting you prep for a difficult fight). Your other major help will come from the fact that everyone else playing this game is dying too. Activate a bloodstain on the floor and you can see how someone bought it, tipping you off with vital info about a nearby foe or trap.

Playing online also allows you to call on other players to help you take on a difficult area, or you can lend your muscle and go and help them yourself. Be warned, though: if you’re alive (rather than in phantom form), other online gamers can invade your realm as phantoms for a bit of player vs player action. The game has the good sense to match you up so you don’t get some big brute wiping out newbies, and it’s a great addition to the gameplay.

Once you get the hang of Demon Souls being a genuinely hard game, you’ll be OK with the fact that it doesn’t lay everything out for you. However, the one area that needs a huge amount more explanation is the World Tendency. If the World Tendency is pure white (usually when you’re alive and you’ve just completed a major milestone, like killing a boss demon in that world) or pure black (when you’ve died a lot or killed one of the non-player characters) you might be able to access special areas and collect magic items. Baddies are also easier to kill when it’s white, although they reward less souls and drop less valuable items. If it’s closer to black, enemies are more butch, hold more souls and drop better items. It’s worth learning more about from the online wiki if you want to get the best from the game, although it is possible to bumble through without taking note of it. As with most aspects, the game certainly won’t force the knowledge on you.

So, should you be choosing a character class, taking time to make them look their best with a multitude of facial options and stepping into the fog to start collecting those all important demon’s souls? Definitely. It may be tough, but if you dodge this challenge you’ll be kicking yourself for years to come when other gamers tell their extraordinary tales of death and woe.