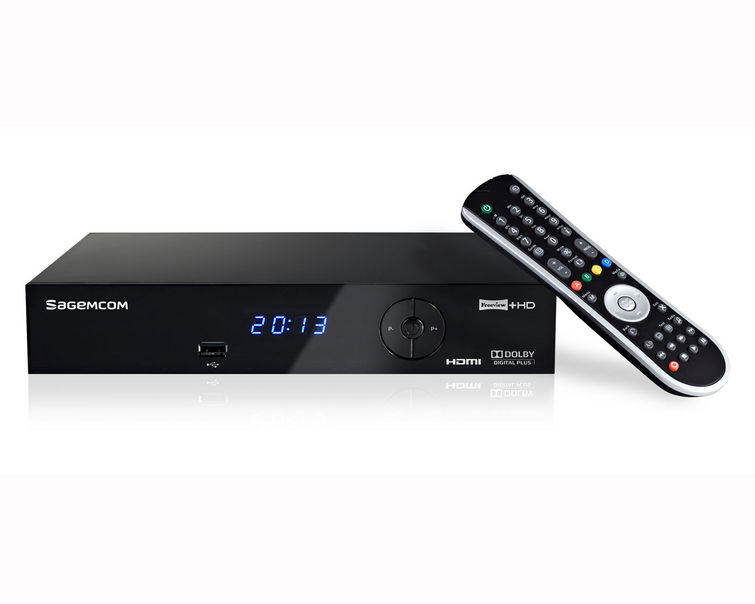 So for a bit extra money over a standard HD player, this unit provides two Freeview HD tuners and a 500GB hard drive.

Because of the recording facility, it offers so much more than a playback only device. The player lets you pause live TV, rewind it, record two programmes at the same time as well as watching a recorded show while you record two others.

The device is smaller than you think. It is about two-thirds the size of a Sky+ HD PVR and its glossy black finish attracts fingerprints like nobody’s business. Also, it looks quite ugly compared to the Sky box too.

The display is retro with an LED timer on the front and not much else. It shows the time and the channel number and that’s about it. Handy as a clock, we guess.

Where this differs from normal Freeview recorders is the abliity to watch and record the three new terrestrial channels (BBC HD, Channel 4 HD and ITV 1 HD).

Setting up is easy enough. Switch on, put in the aerial and HDMI cable and once the box has found the channels you are good to go. Surprisingly, while the box is small there is also a power brick you have to find space from in your set up.

The remote control is a bit better looking than the unit. It is easy to read and the navigation pad is accompanied by the menu, media, back and exit buttons.

The media button shows you a list of recordings you have made. Here you can also rename what you have recorded as well as create folders and move recordings into them.

The EPG runs to eight days and while the unit doesn’t retain this information in its cache, it is retrieved fast enough so information is visible almost as soon as you hit the button.

The guide shows up to seven channels at once and you can specify if you want to look up to four hours ahead in the guide.

As with other Freeeview+ recorders, you can either record an entire series or just the one episode. Of particular note is that the recorder can also show alternative showings of the same programme if both tuners are in operation at the time of recording. It can record two programmes in HD while watching a third HD channel without the box breaking sweat.

Just like Sky+ HD, the device keeps up a thumbnail image of what you are watching so you can watch telly and look through the EPG at the same time. The info panel also displays the time and title of the following programme.

We started our review of this before a firmware update was released. Previously, the remote could be slow to respond, but the firmware update seemed to solve this particular problem. We couldn’t seem to update it over the air at all, but managed to do so but downloading the firmware to a USB stick and plugging this into the port on the front and following instructions from Sagemcom’s website. After a few attempts we were successful but the instructions could have been made clearer and we are not sure if many people would go down this route unless they were forced to.

The HD picture quality was superb, in fact on a par with Sky. We flicked between Freeview and Sky showing the same channels and we were hard-pressed to tell any difference between the two.

While this is one of the first Freeview+ HD PVR’s out in the market place, Sagemcom claims that the unit is upgradable and features, such as BBC iPlayer, may see light of day on the unit at some point.

At present there is no support for formats such as MKV or Divx, which may stop some enthusiasts from buying the unit.

Overall, the box does its job but is overpriced. We are confident that as more Freeview HD PVRs come onto the market the price will drop. We also will expect to see players be able to act as home media players, playing content from home media servers and from the internet. Sadly this is not something the Sagemcom box can do at present. Review: One For All SV9380 Full HD Indoor Aerial