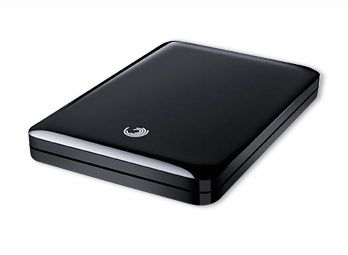 What’s got a 2.5-inch form factor and holds 1.5TB of data? Seagate’s new portable external hard drive. OK, not much of a punchline, but Seagate says the FreeAgent GoFlex ultra-portable drive is the industry’s first to hold 1.5TB and not give you a hernia carrying it around.

According to Seagate’s sums, that 1.5TB of capacity people can now store and carry up to 60 HD movies, 750 video games, thousands of photos or countless hours of digital music.

The drive features a USB 3.0 connection and ships with a USB 3.0 interface cable (which still works with existing USB 2.0 ports).

“That accelerates the transfer speed of a drive up to 10x when connected to a USB 3.0 port, when compared to a USB 2.0 port. For example, a drive using a USB 3.0 connection can transfer a 25GB file in under five minutes versus the 14 minutes it would take using a traditional USB 2.0 drive,” a Seagate spokesman said.

The FreeAgent GoFlex drive is available now in the US and will be released in the UK later this year.