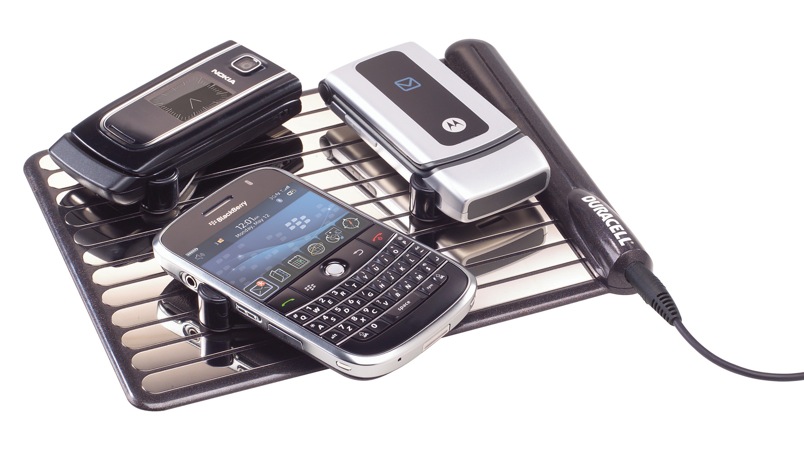 This journalist remembers fondly as a young hack coming up with April fool’s jokes for a publication he worked on. One such idea was wireless power. But it seems that over the last few years what was originally a wheeze to crack wise on 1 April has actually turned into reality. Now Duracell has its myGrid wireless charging pad that will recharge your iPhone or Blackberry without it ever physically connecting.

The Duracell myGrid  is a little like another similar product, the Powermat. The myGrid can charge four gadgets at the same time without using a cable.

Just place an iPhone, BlackBerry or other compatible device on the myGrid mat and the devices start charging. The mat itself needs to be connected to a mains supply with a cable, but that is the only one needed.

Each device also needs an adapter, which is provided in a handy black sleeve or clip with tiny metal electrical contacts on the outside.

Adapter sleeves are available for a range of popular gadgets, including BlackBerry phones, iPod Touch and also some Motorola and Nokia phones. At present there does not appear to be any adaptors for the iPhone 4 or the new iPod Touchs which recently came out.

The myGrid is great to use if you have the relevant phones. Unfortunately there is no way at present that any of the adapters can be attached to an Android phone as the ones provided did not seem to fit well on our Samsung Galaxy S. Also, headsets, camera and a few other electronic devices may leave you struggling to find a cable to charge with. But we hope as the device gets more popular, other adapter will be available.

The myGrid is supposed to handle up to four devices, which it can with a bit of thought.

That said, it charges really fast, unlike the slow trickle you can have when connecting a phone to your laptop’s USB port.

Overall, the Duracell myGrid as a definite step in the right direction as far as wireless charging is concerned. We hope that soon we’ll see devices that have been designed so that special sleeves and adapter tips aren’t required in order to charge wirelessly. The myGrid is definitely the best we’ve seen yet.