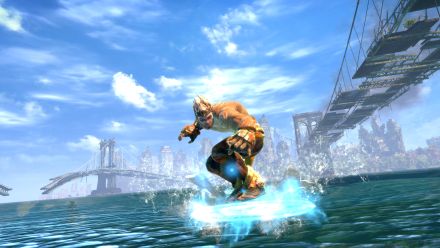 The plot is by screenwriter Alex garland (28 Days Later, Sunshine), who worked on the project for two years. The soundtrack is by Nitin Sawhney. And the king of motion capture, Andy Serkis, lends authentic movement to the main character. But Enslaved: Odyssey To The West is no movie…

If you needed proof that games are as ambitious, as well-crafted and as star-packed as movies, then it’s here in spades. Based on the same 4,000-year-old Chinese novel that the TV-series Monkey used for its storyline, Enslaved sees Serkis play the character with a familiar stick, headband and flying cloud. With humanity ravaged and enslaved by an army of mechs that continue to hunt them, naturally Monkey’s kit has been given a futuristic twist.

So that staff pops back into a small arm holder when he’s not mashing mechs, as well as shooting energy bolts like a rifle when needed. His cloud works like a hoverboard from Back To The Future, as long as he’s within range of the right kind of energy. And the headband makes sure he doesn’t leave his hacker companion Tripitaka (Trip for short) behind, as he looks to get her home after their escape from a slaver ship. His headwear is also the reason the game is called Enslaved. She may use her hacker skills to upgrade the headband to help Monkey spot mines and mechs, but it’s really there for control. If he allows Trip to die, he dies. If he gets too far away from her, he dies. That second rule is harshly followed. Wander too far off in the opposite direction and she terminates you with too little warning. It’ll certainly make you think twice before you pilot your cloud too far away from here and it jars a little, especially as the pair start to become friends as they make their way across a ruined city.

That it’s the only thing that does really jar is a tremendous achievement. As you’ll see from the screenshots the game is truly beautiful and Serkis’ mo-cap work – as you’d expect from the man who gave such character to Gollum in Lord Of The Rings and to King Kong – translates to make Monkey a fully-rounded character. None of which would matter if the game play fell short. Thankfully, the exhilarating mix of fighting and strategy will keep you plugging away long after the significant other in your life has nagged you to put the controller down and come and rejoin humanity. Tension mounts as a step around the corner awakens a mech you weren’t expecting to see (or one that’s been there so long it’s become part of the greenery, stepping out of the wall flowers to make you jump). And it’s refreshing to see that not everything can be defeated and sometimes it’s better to run and outwit your opponent.

Great soundtrack, sumptuous visuals and a compelling storyline. It might not be a movie but it’s the closest you’ll come to starring in a blockbuster this year, no monkeying around.

Enslaved: Odyssey To The West is out now on PS3 and Xbox 360.