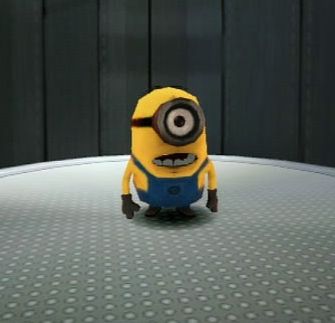 Like the movie it’s based on, this game has a real sense of fun: from the Gru-torial that kicks everything off and the dry wit sprinkled through the dialogue, to the bonus despicable points on offer for defacing artworks or expensive items.

The plot sees criminal mastermind Gru in a very different race to the moon, as his rival evil genius Vector plans to steal it before Gru can shrink it and get his own hands on it. Once you’ve had the joy of the extremely catchy theme tune and of realising that it’s actually Steve Carell’s voice coming out of Gru, it’s onto the gaming. As platformers go, the levels can be frustratingly difficult one second and much easier the next. At least the younger audience that’s likely to play this title has been catered for with the option of a Despicable Cheat. Spend a too long trying to jump from frozen block to laser-protected platform and the following message should eventually pop up: “Hey it looks like you’re having a lot of trouble here. Want to forget about this challenge and skip to the next area?” If you’re a purist, there’s the option to say no. If you’re a casual gamer looking to jump to the next puzzle, you can press ‘Yes’ without feeling too despicable.

The tricky puzzles also have a built-in mechanism to help you clear them. As you progress through the levels you’ll pick up bonuses (some more hidden, some freely available) and these can be cashed in to solve a problem by showing the step-by-step solution needed to complete it.

The main difficulty in the game comes from the fun way your army of minions can be used to help you, for example by freezing them into blocks to push buttons, stringing them together to form bridges or using them to bounce items across the screen. Movement through the platform elements of the game is also helped massively by your arsenal of super villain weapons. That freeze ray can halt blocks so they can be jumped on or stop columns from mashing Gru from above, while a web thrower can hold spinning platforms in place. And you can even find yourself shooting the sides of a tunnel to manoeuvre the platform you’re standing on from side to side. To help break up all that platforming there’s also a bit of a flight sim – good thing too, as the levels do become a bit samey after a while.

For a film tie-in, Despicable Me is pretty solid. As Steve Carell would say (and frequently did during our play through), “It would go a lot faster without all the failing!” Yeah, but there’s always that Despicable Cheat if we need a helping hand.