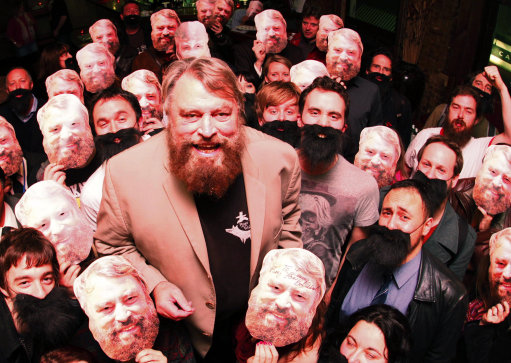 He’s the Prince of the Hawkmen in Flash Gordon and now legendary actor and possessor of very loud vocal chords Brian Blessed has lent  those dulcet tones to be the new voice of Tom Tom. We caught up with him in a bar in Soho.

Blessed came to lend his talents to the sat nav following a campaign on Facebook. 25,000 fans joined the campaign to get the actor to help drivers find their way around the country.

But the actor is not only going to be helping drivers stop getting lost, he’s also planning to go into space. The adventurer has gone to the very ends of the earth too.

“In 2004, I went to the North Pole with the British Expeditionary Force for six months and a gadget shop were my sponsors.” Blessed went with famed explorer David Hempelman-Adams on that adventure.

The Shakesperian actor plans to go in the ultimate gadget, a space rocket and go aboard the International Space Station. “I’m going into space next year. I’ve completed space training in Moscow. It was about 600 hours of training which took two years to complete. I’m now first reserve for the Soyez and I could be called tonight!”

Blessed is 74 and hasn’t let his age be a barrier to his adventuring.

“I bench press about 300 pounds every day and run five or six miles as part of the training for the Soyez flight. But space isn’t as tough as you think. We are going up in Soyez 4, between spring and autumn next year up to the actual space station. I’m going to be a spokesman for the whole program.”

Blessed works out at his gym and likens it to something out of the “Rocky” films and very Spartan. He eschews gym machines and gadgets favouring carrying about rocks and sacks of potatoes.

Brian Blessed on your Tom Tom satnav is available from the Tom Tom store for £7.95.