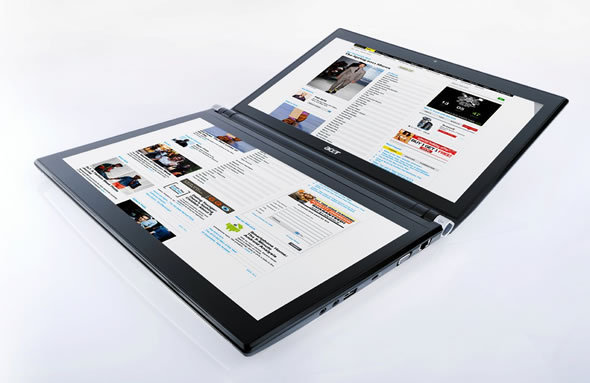 Acer has pulled a trio of tablets out this week with 7- and 10-inch Android tablets and a 10-inch tablet running Windows 7.

The devices were announced in New York and as well as these, the company revealed details of its forthcoming dual-screen tablet, the Acer Iconia.

The 7-inch Android device sports a resolution of 1280 x 800, is 16:10 and has full touch capabilities. It boasts a front-facing camera and a dual-core processor and Adobe Flash 10.1 is supported. The tablet features both Wi-Fi and 3G connectivity and DLNA connectivity.

The 10.1-inch Android tablet sports a full capacitive screen, Wi-Fi and 3G connectivity and is 13.3mm thick. It features an HDMI port with 1080p playback.

The tablet also sports a gyroscope on board and Acer said that users will be able to play games on the device that are “an entertainment experience on par with the best game consoles”.

Lastly, the 10.1-inch Windows tablet comes with a full-size keyboard, a docking device, is only 15mm in depth and weighs less than a kilo.

The tablet boasts an AMD chip inside and is touts “a superior touch experience”.

There are also two 1.3MP cameras, one rear and one front as well as 3G and Wi-Fi.

The Acer Iconia sports dual 14 inch touchscreens and built-in custom gesture support. It has a lower screen that can act as a virtual keyboard so it function as both a tablet and a laptop. Both multi-touch screens have 1280 x 800 resolution, with 720p HD playback support.

Pricing for all of the devices is to be confirmed.