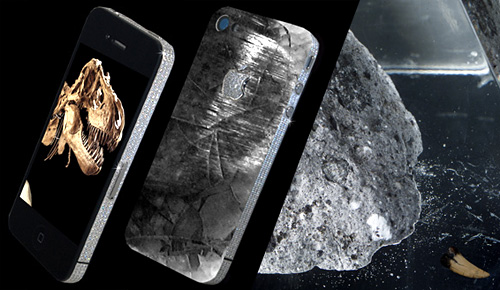 Want a phone that proclaims you truly make ridiculous amounts of money? How about one embedded with a Tyrannosaurus Rex tooth?  Yeah.

Stuart Hughes, apparently a “luxury electronics designer” (presumably not the same Stuart Hughes your writer went to school with, I think he’s a butcher now), has unveiled the iPhone 4 HISTORY edition. Putting it in ALL CAPS may seem a bit excessive, but this is a phone with a 65-million-year-old tooth from one of the Earth’s most legendary predators in it.

(Unless T. Rex was actually a scavenger, but we’ll leave that debate for now.)

The rear of the phone boasts the bit o’ gnasher and some meteoric stone for good measure. The tooth was splintered and then shaved into the stone, so don’t go thinking you can stab people with this phone. If nothing else it’d really confuse the coroner.

Just to really show off, the phone also has 8.5 ct “IF” flawless diamonds shoved in there, and the Apple logo on the rear is made from diamond and platinum.

How much for this ludicrous status symbol? £39,995 to you, sir/madam. Now don’t drop it in your drink.