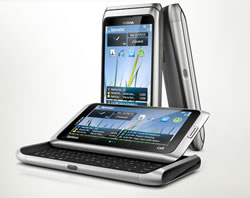 Mobile operator Three is to be the first in the UK to sell Nokia’s top flight business smartphone E7. The network puts the device on sale in the first quarter of 2011.

Nokia, facing strong competition from the likes of the Apple iPhone and Google’s Android smartphone, launched the device at its Nokia World conference earlier in September. It has been refered to by the company as its “premier business-class” device aimed at enterprise users.

The smartphone sports a 4-inc Amoled touch screen with a 640 by 360 pixel resolution, full slide-out qwerty keyboard, 16GB of internal memory and an 8-megapixel camera.

It will also support video and multi-party conference calling. It boasts those features beloved of enterprise  IT  admin such as remote lock and wipe. .

Users will be able to access corporate email and social networking accounts as well.

It comes with a feast of apps pre-loaded, such as QuickOffice (for viewing and editing Microsoft Office documents) and Adobe Reader for PDFs.

It features the new Symbian ^3 OS (which may put off users but surely puts off writers writing about it as it is hard to find the hat symbol on most keyboards).

The phone goes on sale at the Carphone Warehouse sometime in March and is asking customers to register the interest in the device beforehand. The E7 is expected to have a similar price to the N8, which is available for free on a £25 per month contract.