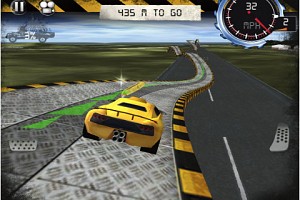 With Christmas barely days away, the BBC has launch a couple of apps for the iPhone and iPad based on its successful Top Gear show.

Top Gear: Stunt School challenges players to complete 60 physics-based stunts by modifying their car with extras such as jet engines, huge wheels and hang-glider wings. Apparently there are over 2 billion different combinations of add-ons and modifications, which players can also use to try and beat a lap time set by The Stig around the Top Gear test track.

The game is linked to the Appple Game Center so you can post achievements and friend challenges.

Next up is a Where’s Wally take with the Stig in the role of someone to be found among the crowd. It allows players to follow Stig to the farthest corners of the globe in an attempt to locate the faceless hero, as well as some of his most famous friends.