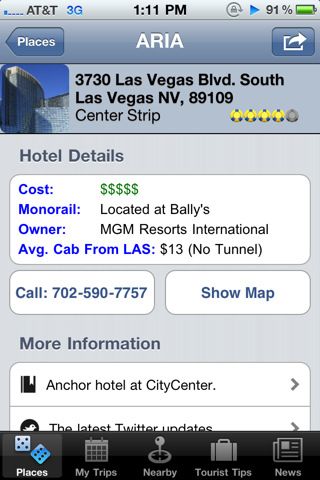 As if they know a load of tech heads are about to descend on Nevada’s flashing desert oasis, the Vegas Media Group has released an update to its location-aware interactive city guide. Vegas Mate 3.0 is now a Universal app for iOS devices, running with full features on the iPhone, iPod touch and for the first time on the iPad.

“Vegas Mate includes all the latest Las Vegas content, including exclusive hotel guide information,” said the official release. “By using built-in location technology, Vegas Mate can orient itself based on where you are, a powerful tool for guide-book apps.”

Vegas Mate 3.0 also includes several new features, such as My Trips – which allows users to plan their entire vacation using a database of hotels, restaurants, shows, nightclubs and more.

Once the trip has been built, it can be printed using Apple’s new AirPrint technology (iOS 4.2 or higher required) or emailed to a friend.

Other features include:
* Exclusive hotel guide information from award-winning writer Steve Friess (USA Today, New York Times, AOL News).
* Read, write and share reviews for hundreds of hotels, restaurants, nightclubs and shows in Las Vegas
* See what’s nearby (and know if it’s any good) at a glance
* View restaurant menus (where available)
* Reserve restaurants via OpenTable
* Expert Help feature includes information on tipping, climate, the ‘$20 trick’ as well as other travel tips – become an expert yourself
* Show all locations quickly on a map

Supported languages include US English, German, Romanian, Russian and Spanish and the app runs on iPhone, iPod touch or iPad running iOS 4.0 or later. It costs $1.99 in the iTunes App Store.